What Happened to Long Table Pancakes After Shark Tank?

Heirloom grains are cultivated from seeds that have been passed down from generation to generation. This makes them more authentic as they are free of any genetic modifications. Long Table Pancakes are made of heirloom grains, so they taste better and are more nutritious. Founder Samuel Taylor pitched his product on season 14 of Shark Tank and didn’t get a deal. As of 2023, Long Table Pancakes is worth $900,000.

Samuel McClure Taylor hails from Chicago, Illinois. Not much is known about his education, but spent his earlier years pursuing his artistic dreams. He co-founded The Back Room Shakespeare Project, a small Chicago theater company that opened branches in New York and LA.

In 2015, he started writing about his acting career. Taylor published two books, Blueprints for a Shakespeare Cult and My Life with the Shakespeare Cult. His knowledge of Shakespeare landed him a job as a lecturer at the University of Chicago and taught there for over four years.

The writer became obsessed with making pancakes to impress an acrobat he was in love with. His flapjacks needed to be light but filled with enough nutrients to keep his partner fueled for every performance. This led him to discover heirloom grains. 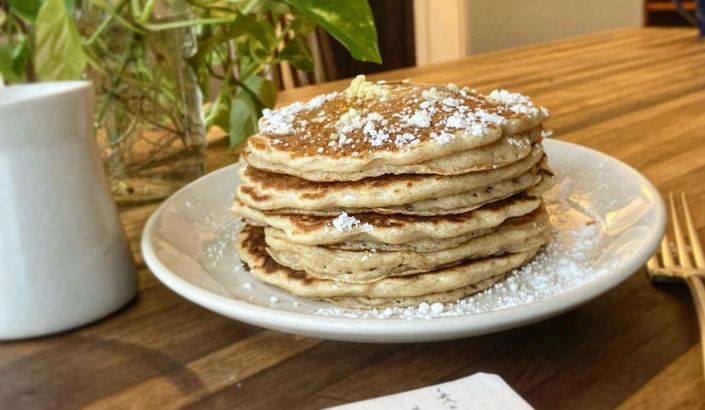 The two eventually got married, and their love for pancakes did not fade. Those who tasted Samuel’s pancakes encouraged him to start a business. Two of his friends offered to design the packaging and a website, while his mother wanted to take care of the paperwork.

Getting on Shark Tank

The whole thing initially started as a side hustle, but when the pandemic hit Samuel focused on the venture full-time as his acting work dried up. By mid-2020, he managed to double his revenue but was still only making around $20,000 per year.

To keep up with increasing demand, the aspiring businessman needs to raise capital to scale the business. Taylor got the courage to apply to Shark Tank and producers picked him to feature on episode 10 of season 14.

Sporting a glorious beard, Samuel delivered a strong pitch and the Sharks loved the pancakes. Mark Cuban described them as the “best pancakes I’ve ever had.” Friends star David Schwimmer also made a surprise appearance which got the Shark excited.

Sam came across as a very likeable guy and fans of the show will be keen to support the business. Despite the episode only airing, the pancake company will get a huge bump in orders from Shark Tank. With Schwimmer’s short cameo, the episode will get a lot more syndication on TV and online.

Interested viewers can purchase the product in packs or wholesale on their website, LongTablePancakes.com. They are also available in 20 local stores in Illinois, New York, Michigan, and Pennsylvania. Sam is offering a generous 15% discount on orders.

Many of their bundles received 5-star reviews from customers on their website. This is a good sign that the company is doing well and will be looking to expand into new areas. Currently, Long Table Pancakes is valued at $900,000. The business should make over $100,000 in sales for 2023.