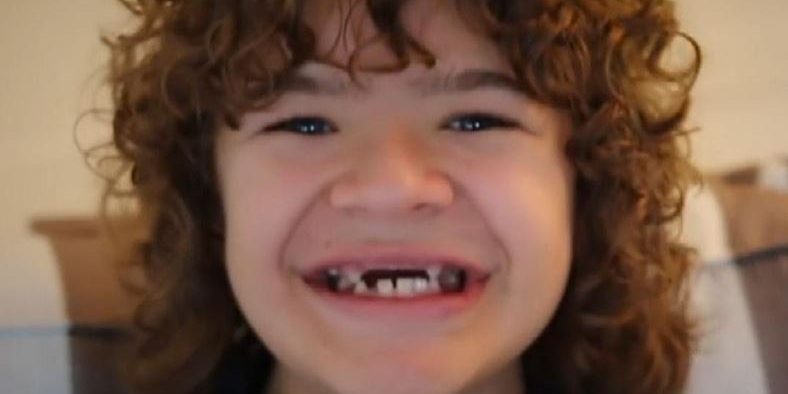 15 year old Gaten Matarazzo plays the lovable, Dustin Henderson in the hit series Stranger Things. Fans of the show may have noticed that Dustin appears to be missing his front teeth. In the first episode of the show, bullies insult Justin’s toothless grin but he quickly snapbacks stating “his teeth are still coming in”. It turns out in real life, Gaten suffers from cleidocranial dysplasia, a genetic disorder that affects the growth of all bones, mainly his teeth and collarbones. CCD is very rare and only impacts one in every million people.

The average person has a set of baby teeth that fall out and your adult teeth come in, with cleidocranial dysplasia this doesn’t happen. The Stranger Things star has had multiple surgeries to extract teeth and also wears an appliance to pull down his teeth manually. The condition will lead to even more surgeries in the next few years.

The actor is a huge inspiration to those suffering from the disorder and acts as an ambassador for CCD Smiles, an organisation that raises awareness and money for people with CCD. What most people don’t realize is insurance doesn’t cover everyone’s surgery. There’s always the argument whether the surgery is cosmetic or medical which is unfair. Without doubt, CCD is a medical condition, declaring it as cosmetic is absurd because every person needs teeth!

Gaten has appeared on various media outlets to promote the cause.

Despite suffering from such a debilitating disorder since birth it didn’t hinder his ability to land the biggest role of his acting career, making him one of the most recognizable faces on TV. The Duffer Brothers were so impressed by Gaten’s audition tape, they wrote his condition into the script. Before getting cast to Stranger Things, cleidocranial dysplasia was the sole reason he wasn’t getting any big roles. He would go to auditions three times a week all the time and experienced nothing but rejection. It’s amazing the kid still had the perseverance to keep applying for new roles after many no’s.

Luckily for fans of the popular Netflix series, season three of Stranger Things is in production so we’ll get another season of Dustin’s pearly whites!