If you spend any time on TikTok, you already know that the world’s wildest social media platform is taking the definition of celebrity to strange places. And you’d be hard-pressed to find a celeb with a stranger hobby than Francis Bourgeois, aka the TikTok Train Guy. He’s made his reputation as a trainspotter, and he’s got a massive following of 1.8 million followers who love his enthusiasm for trains.

Yup, you read that right. Francis Bourgeois, whose real name is Luke Nicolson, is famous for making videos about trains.

Bourgeois, who grew up in Britain, apparently spent way too much time with his parents on outings to Willesden Junction, which is one of the busiest train stations in London.

That was when young pre-Francis caught the bug, evidently. He would supposedly draw pictures of the tracks after visiting the station, and the eventual goal of the 21-year old student at the University of Nottingham is to specialize in railway engineering when he finishes his degree in civil engineering.

“I hope to spend the rest of my days working on the railways and making them better for everyone,” he’s said, and in the meantime he’s bringing his passion to the masses.

He does work hard at his chosen obsession, though. Bourgeois actually researches the trains he spots, and he’s been known to make videos about iconic railway cars, where they go, who owns them and so on. As a result, there is some amount of education to his chosen nuttiness, so bless his little train-driven heart for that.

The most unique thing about Bourgeois’ videos is that he gushes like a schoolgirl about the trains he spots. They’re clearly love objects to him, or close to it, although somehow he always manages to stop just short of the line that would edge him into genuine railway creepiness.

Bourgeois classifies himself as a “modern” trainspotter, which means he’ll make videos as opposed to just sitting and watching the trains go by, then take notes in a notebook.

His esoteric moniker actually has some historical significance, too. The original Bourgeois didn’t know nearly as much about trains, presumably, but he was a court painter for King George III.

No one knows what the connection is between Nicolson and his alias, but it seems safe to say that we’ll all find out at some point, like it or not.

Another unique element of Bourgeois video appeal is that he’s a bit of a fashion plate, or at least a railway version of a fashion plate. He’s been seen wearing a striped British Rail shirt, then an inspector’s hat from World War II, and finally a 50s-style overcoat.

Bourgeois is also a true romantic when it comes to his love life as well. He does have a girlfriend, which makes sense since he’s a model who’s signed with an agency, and she turns up frequently in his videos. She’s blonde, attractive and unnamed, which is another odd element of the train spotter’s appeal. 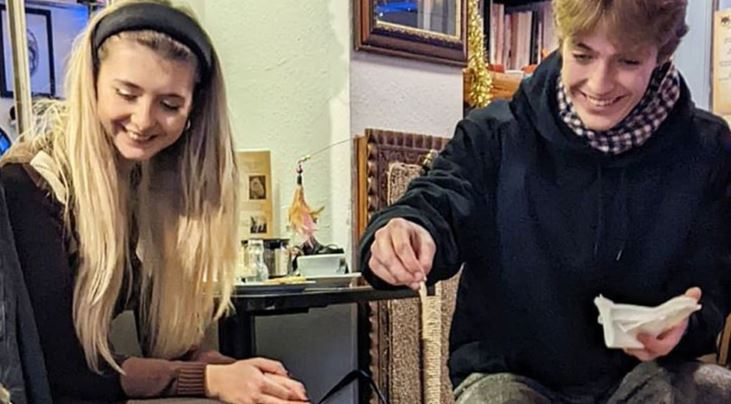 Perhaps the strangest thing about Bourgeois’ journey is that he hasn’t capitalized on it monetarily yet, even though he was spotted doing his trainspotting routine with Joe Jonas of the Jonas Brothers. Rumor has it he gets $34 per train video, but there’s really no information about how that works or what his overall net worth is.

He recently left his job to do who knows what, so perhaps that stranger on a train sitting next to you during your next train trip will put you in one of his unique videos.