Elon Musk Hair Transplant: how he Reversed his Hair Loss 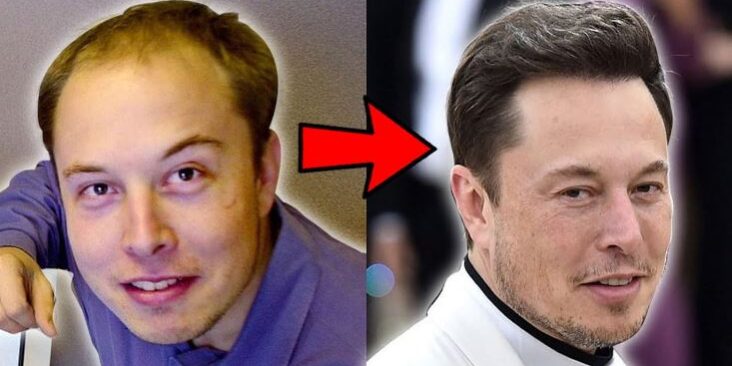 Despite being nearly 50 years old, Elon Musk sports a healthy head of hair most 30 year olds are jealous of. However this was not always the case. When Musk was in his late 20’s his hairline was visibly receding and it looked like he would soon be bald. Given how much his hairline had receded, it seemed certain that he suffered from male pattern baldness.

In 1999 Musk had almost no hair in the front parts of his head apart from a few strands that he let grow out. However once male pattern baldness sets in, it advances rapidly. Over the next two decades his hairline completely regrew and he now has a perfectly full hairline. Such a regrowth is not possible without intervention and almost certainly got a hair transplant.

Male pattern hair loss is believed to be due to a combination of genetics and the male hormone dihydrotestosterone. DHT is an endogenous androgen sex steroid and hormone naturally produced in males. DHT plays an important causative role in pattern hair loss. From a genetic perspective Elon Musk’s father Earl Musk, appears to have a full head of hair despite his advanced age. However the genetic traits often skip generations. There are very few available pictures of Elon Musk’s grandfather Walter Henry James Musk and he is often wearing a hat, so it’s hard to tell.

It could be the case that Elon Musk had above average testosterone levels contributing to DHT and causing his baldness. Professional bodybuilders use performance-enhancing supplements to boost their testosterone levels to supernormal levels. Consequently many of them suffer hair loss.

Musk had an average physique in the 1990s, so it’s unlikely he had excessive testosterone levels. It’s more likely his receding hairline can be attributed to genetic factors. Musk obviously did something to reverse the hair loss. In 1999 Musk’s hair loss was obvious and by 2004 the loss had improved but he still didn’t completely have a full head of hair. By 2010, there was no trace left of his previous hair loss.

Whatever treatment he took was extremely effective. There are medications designed to slow hair loss, the most potent of which is called Finasteride. Finasteride is highly effective and in some cases can decrease DHT by 70%. However, even if you decrease DHT by 100%,it will not cause hair that has already been lost to grow back. The only reasonable explanation for Musk’s hair recovery is a hair transplant.

Hair transplanting is a common procedure and according to Market Insider – 650,000 hair transplants are done annually. Despite over 35 million men suffering from hair loss worldwide the cost of getting hair transplants is still high. The average price of a hair transplant in the US varies from $4,000 up to $15,000.

Hair transplant technology has improved dramatically over the past two decades. In the 90s when Musk first started experiencing balding, the technology was still in its infancy and it’s likely that he wouldn’t have wanted to get it back then. In the present day, hair transplant procedures are safe and effective. Regardless of how he achieved it, Musk’s hair regrowth is undeniably impressive. His full head of hair gives the illusion of youth, in reality he is actually 49 years old!