Collin Abroadcast is a popular YouTube channel run by American, Collin Rodefer. He records himself bargaining in counterfeit shops throughout Asia to purchase fake knockoff items at ridiculously cheap prices. While the premise for the channel sounds strange, his videos are incredibly easy to binge watch.

Who would have thought watching an American bargain with an Asian lady holding a calculator could be so entertaining! Surprisingly, Collin has been able to grow a huge following by creating shopping vlogs and his videos generate millions of views every month. Beijing, Shanghai and Vietnam, he has been to all the major knock off markets, entertaining viewers with his playful banter and bargaining skills.

The most-viewed video on the channel is at Beijing’s Silk Street and has pulled in a whopping 14 million views to date. The video went viral on Chinese social media sites and sparked a lot of controversy online. People are appalled at how vendors exploit foreigners by selling them overpriced counterfeit items. Luckily, Collin is too streetwise for these sales people and is now a seasoned veteran at bargaining for goods. Bargaining is seen as normal in Asian while in the Western world it’s very uncommon.

In the video below, Collin buys a high-quality counterfeit Moncler jacket for just $63, bargaining the aggressive vendor down from $710. The real price for a real Moncler jacket would be $1,200! The best part of the video is when he’s bargaining with the crazy Chinese lady for a pair of Jordans. The sales woman is relentless but eventually gives up as Collin threatens to walk away multiple times.

How Much Does he Make

Making YouTube videos is now his full-time job, previously he worked as a teacher and English professor at Anhui Polytechnic University. While Collin is not rich, he is receiving some hefty checks for his work online. On YouTube he has three main ways to make money – ads on his videos, sponsored videos and selling merchandise. Based on the number of views he receives each month, I would guess he makes $5,000 to $10,000 per month. In a recent video I watched, he was promoting Skillshare, who probably paid him a nice chunk of money for a shout-out. One of the best things about living in parts of Asia is that accommodation is cheap so he doesn’t need to earn a lot of money to have a nice lifestyle. 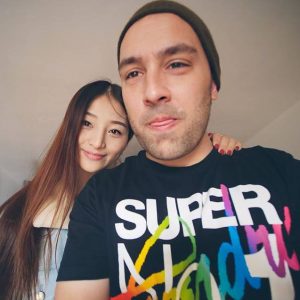 Does Collin Abroadcast have a Girlfriend?

With the rise of his YouTube channel a lot of subscribers have become more interested in his personal life. It’s unknown whether or nor he has a girlfriend. Being a foreigner in a place like Asia means he would attract interest from women since he looks different compared to the average person on the street. The photo above could be his girlfriend!