What Happened to Yahoo – Their Rise and Collapse! 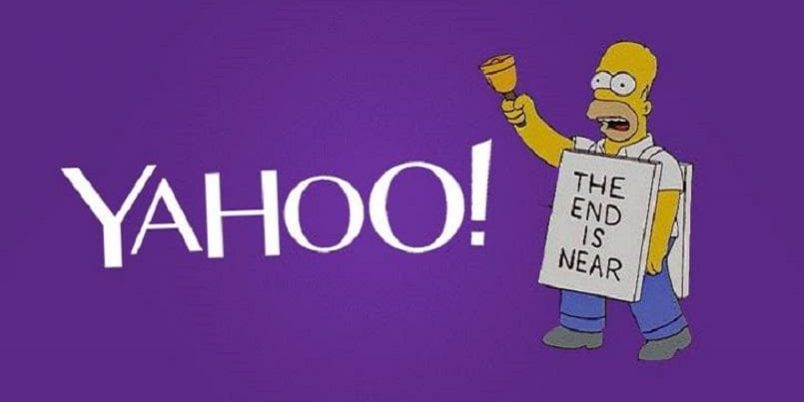 Looking back now it’s crazy to believe that Yahoo was once worth over $100 billion. Sadly today Yahoo is a shell of its former self, Verizon bought the company for $4.8 billion in 2016, a fraction of what it was once worth. Yahoo was a huge company but the problem was lack of strategy and inability to adapt to trends. Their main downfall was they didn’t exactly know where they fit within the tech space and got crushed by competition.

Yahoo.com was founded in 1994 by two Stanford graduates, Jerry Yang and David Filo. Its purpose was to act as a portal to the Internet at a time when it was just a mess of unorganised websites and information. Back in the mid-1990’s there were very few convenient ways to browse the internet and people struggled to find the information they needed. The company went public in 1996, and the following year was the second most visited website on the internet behind AOL, another a fallen giant.

In 1998 Yahoo was approached by Larry Page and Sergey Brin. The pair were had just created PageRank, a search engine algorithm to quickly find relevant information on the Internet. The Stanford students asked for $1 million dollars for the algorithm. Yahoo turned them down as they thought it would take users away from their main website causing them to lose ad revenue. The PageRank algorithm would go on to become Google. During this time the internet was becoming increasingly popular, it was seen as a new economy, a disruptive magical concept that could transform the planet. This notion was pre-emptive and overhyped but still people were throwing investing in any company with a dot com at the end of their name even if they didn’t have a plan of making revenue.

The problem at the time was the technology itself wasn’t good enough for mass adaption. Eventually investors caught on to the Ponzi scheme and the party came to an end in the year 2000. The majority of tech stocks were sold in a panic as everyone ran for the exit. All the major tech companies were hit badly but Yahoo, Google and a few others survived the storm. Yahoo did escape with some immense damage though, their stock price went from over a $118 to $4.06. In 2002 Yahoo was still the most visited site on the internet but lost significant market share to Google in online search. In 2005 Yahoo bought a 40% stake in the emerging online retail company, Alibaba. The remainder of these holdings are now worth $30 billion, make up the majority of Yahoo’s market capitalization today. In the same year they would also purchase the photo-sharing site Flickr. One year later the company made a billion dollar offer to buy Facebook but 22 year old Mark Zuckerberg turned them down.

In 2008 Microsoft offered $44 billion to acquire Yahoo but they laughed it off saying that it didn’t highlight the value of the company. It turns out this would be the highest offer they would ever receive. After a slow steady decline, former Google executives Marissa Mayer came on board in 2012. Yahoo began to heavily invest in mobile and update the brands look and feel. Two years later they acquired Tumblr. All of this didn’t work, by 2016 the company suffered a $4.4 billion loss and they were bleeding money. At the end of 2016, Verizon stepped in and bought Yahoo for $4.8 billion. During the course of its lifetime, Yahoo had bought 115 companies. None of them turned into a hit which could save the company.

What Happened to them?

To answer this question we have to start by rewinding back to the time just after the dot-com crash. Around these times web portals started to become more irrelevant as web users tended to search Google for what they wanted and then venture on into individual sites. Yahoo failed to adapt and got left behind in all areas of business by companies that just did it better. For example Yahoo’s mail service got overtaken by Gmail and Hotmail, Yahoo messenger got destroyed by WhatsApp, WeChat and Facebook Messenger.

Instead of getting their news from web portal sites people began to go on social media to get their news on Facebook and Twitter, dedicated news websites and even YouTube. By 2010 Yahoo had been chipped away from every angle until there was very little left. As users drifted away from Yahoo services so did the ad revenue and company profits. It was a complete disaster, and nobody knew what to do, this is highlighted by the fact that the company went through four CEOs in six years. Unfortunately, this was at a time when the company needed solid leadership the most. To make things worse investors were getting very anxious and called for more change to fix the problem. This created even more instability in upper management, turning the whole thing into a vicious cycle.

During its later years if there’s any chance of Yahoo surviving it would have been through Marissa Meyer. The main issue was that she was not a good CEO and wasn’t a leader Marissa just couldn’t decide which direction to take the company and even the multi-billion dollar Alibaba stake was left sitting there, nothing was done with it. In the end the story of Yahoo shows that a lack of focus, inability to change and a lack of company direction can be fatal. In Yahoo’s case cutting some of the excess fat in their operation and actively reacting to the changing internet landscape around them could’ve save them. As for the future, not a lot is known but we have to see what Verizon can do with the remnants of Yahoo. On the bright side, if there’s one good thing that Yahoo has left us with its Yahoo Answers!