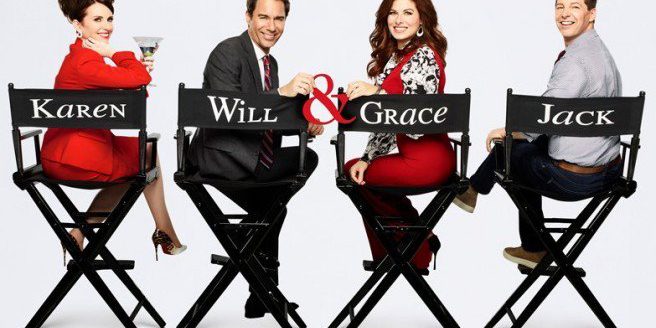 When Will & Grace premiered on September 21, 1998, it became a pop culture phenomenon that forever changed the face of primetime television. Along with the infamous “Puppy Episode” and subsequent episodes of Ellen, it was considered groundbreaking for its portrayal of gay main characters, and the first to be deliberately conceptualized that way. Considered a groundbreaking comedy that helped pave the way for shows like Queer Eye for the Straight Guy, Queer as Folk, and other gay-central productions, Will & Grace has been pivotal in normalizing homosexuality in primetime television.

Fourteen years after its eighth and last season, plus a couple of reunion specials later, heavy speculation ran rampant among fans who thought the series might be the next in the current television trend of rebooting popular televisions series. Lo and behold, the series was confirmed for a revival in early January, with ten episodes announced, to become what will be considered the ninth season – it’s a continuation of the show from the original run, instead of being a complete start-from-scratch reboot like Miami Vice. The new season was eventually extended to sixteen episodes. Today, NBC network chairman Robert Greenblatt announced at the Television Critics Association summer press tour that the reboot, which airs in September, has already been given the green light for a second season, season ten overall, with thirteen confirmed episodes, before the first one has even aired.

The reboot will reportedly ignore the series finale, in which Will & Grace have a falling out that lasts for around two decades, only reconciling when they meet by chance at the college their respective children. Meanwhile, Jack had married Beverly, friend Karen’s long-standing nemesis who was killed not long after the wedding, leaving Jack a very wealthy widower. Karen, on the other hand, had divorced Stan and although was left with no money from her husband, shares in Jack’s sudden (mis)fortune. The new season returns Karen to her mansion and Jack is still Will and Grace’s neighbor. It’s unclear whether or not Grace’s pregnancy, the focal point of the last season, will be retconned with the new season, due to the creator’s determination not to focus on Will and Grace as parents: “When the decision was made to bring the series back, we were like, well, we left them with kids, right? And if they have children, then it has to be about them being parents, ‘cause presumably it would be a priority in their lives. And if it wasn’t a priority in their lives, then they’re still parents, they’re just bad parents, right? We frankly did not want to see them being either good parents or bad parents. We wanted them to be Will and Grace.” Grace’s beau Harry Connick Jr. is reportedly involved “in a small way,” although whether his capacity as Grace’s baby daddy/eventual husband remains intact is unknown. Not much is clear on how much of the final season is to be retconned – so any fans who are dying to find out will just have to wait for the new season to premiere, which it will on NBC on September 28.