Watch the ‘Super Mario’/’Minecraft’ Mashup of Our Dreams 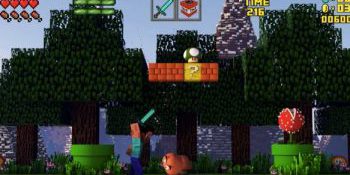 Ever since it bombarded its way into the mainstream gaming scene in 2011, Minecraft’s infamy has only grown, thanks to its legions of loyal players and their love of recreating familiar scenes and locations from fiction, fantasy, and reality. From a complete recreation of the Harry Potter universe to famous European cities, anyone with the talent and the patience to create these elaborate builds brick by brick are certainly worthy of praise (I certainly don’t have either). But one YouTuber by the name of NicksplosionFX chose the route less taken in the Minecraft universe – by mashing Minecraft up with the equally infamous Super Mario Bros.

NicksplosionFX’s YouTube channel is a pretty impression collection of video game mashups of every genre and combination. But his newest release, Minecraft Mario, is like looking at the video game you didn’t realize you needed until you saw it, combining the classic appeal of Mario’s sidescrolling gameplay with good old zombie/monster hack-and-slash, wrapped up in Minecraft’s signature blocky aesthetic, all set to Chris Johnson’s slick Mario-inspired score. It’s hard to watch the minute-long video without jonesin’ to find Steve’s girlfriend in another castle.