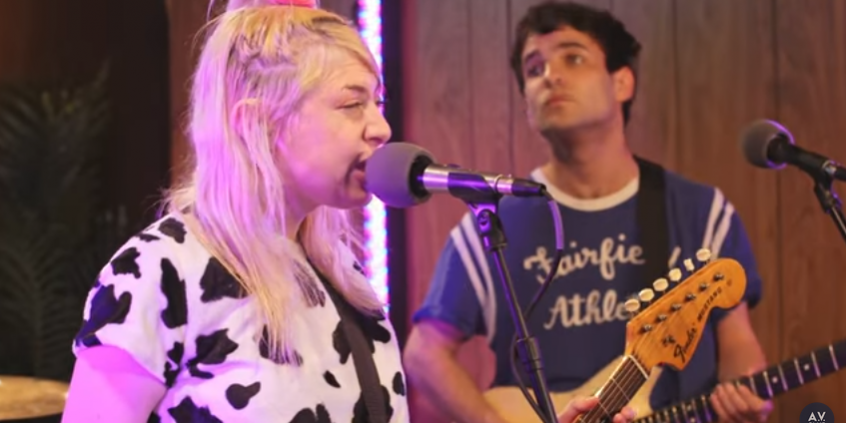 AV Club’s Undercover series has led to many a magical pairing between band and song before, and you can add another one to the list this week. Charly Bliss has graced us with their cover of quintessential ’90 song “Steal My Sunshine” by Len.

Surely you remember “Steal My Sunshine.” It’s one of the iconic one-hit wonders of the ’90s, and perhaps of all-time. Is it a silly song? Absolutely, which is why it’s shocking to watch a movie like Go and see the song being used sincerely. Yes, there was a time that you could put “Steal My Sunshine” on a movie soundtrack and not have it be ironic. That being said, part of the reason why Len reached one-hit wonder status is because “Steal My Sunshine” is super catchy…and it’s even catchier in the hands of Charly Bliss.

The quartet released their debut album Guppy earlier this year, and it’s in the running for being one of the best albums of 2017. Their particular brand of poppy indie rock is infectious, although the voice of the frontwoman could certainly be considered an acquired taste. It’s a taste we’ve clearly acquired, though. Charly Bliss could probably take any song and turn it into something worthwhile, but “Steal My Sunshine” is right up their alley. They take the laid back chill out of it, but the added boost of energy and guitar just takes it to the next level.

The crux of Undercover is that each artist takes a song from an ever-dwindling list, but it seems clear that even if they had their choice of every song available, Charly Bliss would have gone with “Steal My Sunshine.” At the end of every season of the show, the AV Club turns to their fans to vote for their favorite cover of the latest batch. As of this moment, Charly Bliss has got to be the favorite to emerge victorious.