War for the Planet of the Apes Review: Technically Brilliant, But Tedious 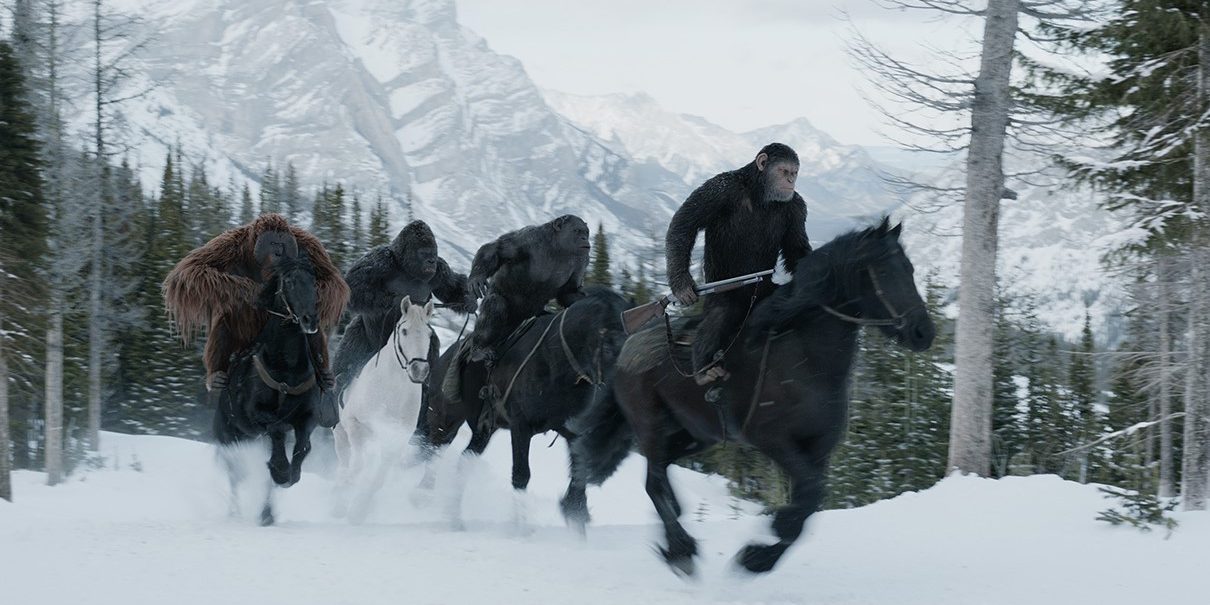 Despite its title, War for the Planet of the Apes doesn’t deliver the all-out battle for the survival of ape-kind (or human-kind, for that matter) that one might assume. While there is plenty of combat, mainly at the beginning and end, the bulk of the film is a meandering revenge story peppered with clichés and war movie tropes.

The story for the third movie in the Planet of the Apes reboot picks up well after the conclusion of Dawn of the Planet of the Apes. The ape colony led by Caesar (Andy Serkis) – the talking, hyper-intelligent ape who started the uprising of evolved apes – is in hiding in the forest, hunted by the human military. The humans have been all but decimated due to the deadly Simian Flu, and the survivors seem intent on wiping out every last ape to secure humanity’s future. Meanwhile, Caesar just wants to live in peace – he didn’t start the current conflict, but he’ll do what’s necessary to protect his clan.

After a devastating attack on the apes’ hiding place by The Colonel (Woody Harrelson), Caesar embarks on a mission of revenge to hunt The Colonel down and kill him. From here, the film seems to want to become ‘an important movie,’ throwing Apocalypse Now imagery at us left and right: bound ape corpses are used as warning totems, classic rock music blares in The Colonel’s lair, and Caesar hallucinates his dead treacherous lieutenant Koba. The Colonel is described as mad, which the audience is apparently supposed to assume because he shaves his head while addressing his troops and wears sunglasses at night, but Harrelson often seems bored, as if he knows the material he’s been given is a half-baked retread. (I half-expected The Colonel to go full Kurtz and plant a lampshade on his head a la Marlon Brando.) If none of that is obvious enough, director Matt Reeves felt it necessary to have graffiti read “Ape-pocalypse Now!” to lazily drive the allusion home.

War for the Planet of the Apes does its best to check the boxes for war and revenge movies, but does so mechanically and sometimes without logic. For example, Caesar and his revenge squad adopt a young human girl, whose sole purpose is to sweetly remind the apes that humans aren’t such a bad lot, but the script gives her almost no personality or motivation. She barely gives a sideways glance towards the freshly killed body of her father (Guardian? Only human she knows? The movie never tells us.), but cries buckets over the death of a simian she just met.

The movie does have some bright spots, including Steve Zahn as Bad Ape, the only other ape in the film besides Caesar who speaks with any regularity. (The rest use a combination of sign language and grunts.) His funny, engaging performance gives much-needed energy to the slow-paced middle act of the film. Likewise, Andy Serkis imbues Caesar with life, even if his only facial expression tends to be one of battle-weary focus. Technically, War for the Planet of the Apes is a wonder to behold; its motion-captured CG apes seem as real as the humans they share scenes with.

But for all of its visual splendor, the film ends up being tedious, noisy, and, dare I say, dull. At first I thought it was just me, until I noticed that the guy next to me in the theater was snoring half-way through. It didn’t quite put me to sleep, but War for the Planet of the Apes is a trite conclusion to the Apes trilogy.