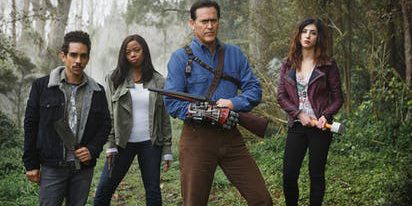 For over 25 years, Universal Orlando has hosted Halloween Horror Nights, an epic celebration of All Hallows Eve. The premier event, which takes place on select nights during the fall, features haunted houses, mazes, and other pulse-pounding experiences based on fan-favorite horror films and TV series. While last year’s goosebumps-raising gathering treated brave park patrons to scares inspired by The Walking Dead, The Exorcist, Texas Chainsaw Massacre, and many more, 2017’s fright-filled festivities seem to be upping the ante. Following previous reveals of American Horror Story and The Shining experiences, Universal has just taken the blood-soaked wraps off Ash vs Evil Dead.
The partnership with the STARZ original series will, according to the official announcement, throw guests “into the loud, brash, and very bloody world of Ash.” On top of the reveal trailer, Universal also offered the following terrifying tease: “The house will feature various locations from the first two seasons of Ash vs Evil Dead and lots of blood. And for those “in the know,” the answer is yes…We’ll be going back to the cabin; with a few other surprises along the way.”
Halloween Horror Nights 27 will take place on select nights from September 15th through November 4th at Universal Studios Florida.
(Visited 191 times, 1 visits today)
Share this post
Share with FacebookShare with TwitterShare with PinterestShare with Google+Share with LinkedIn