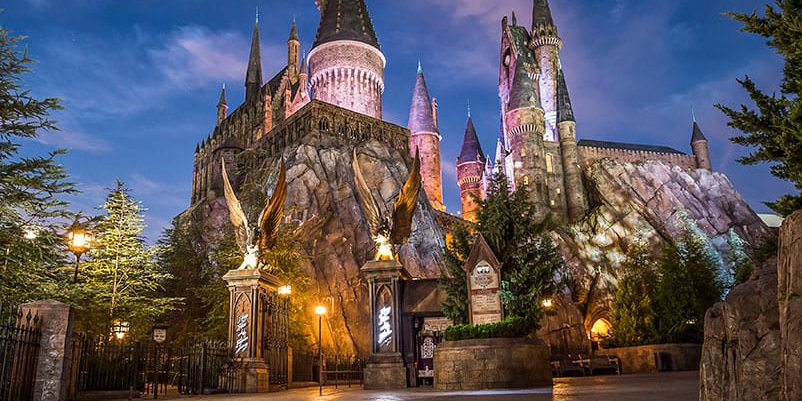 Fans of Universal Orlando‘s Wizarding World of Harry Potter may want to raise a celebratory glass of Butterbeer, as the enormously popular theme park expansion is about to get a lot more magical. Today, on Universal Orlando’s official blog, it was announced that a brand new attraction is headed to the Hogsmeade side of the Potter-themed park, at Universal’s Islands of Adventure. Billed as “a new generation of thrill ride”, the attraction is due to take fans on an immersive new trip through J.K. Rowling’s witchcraft- and wizardry-filled universe in 2019.

Deep diving details are still tucked beneath an invisibility cloak, but the blog post did offer the following fan-teasing tidbits:

“This all-new thrill ride will take you deeper into J.K. Rowling’s Wizarding World, where you will encounter some of your favorite characters and creatures. It’ll be unlike anything we’ve ever done before and it will be fun for the entire family.

The new attraction will be one of the most highly-themed coaster experiences we’ve created. It will combine a new level of storytelling with an action-packed adventure…and a few surprises along the way.

Our award-winning Universal Creative team is once again collaborating with Warner Bros. and the production design team from the Harry Potter films to bring this new coaster experience to life.

This ride is going to redefine the category and transport you to thrilling places, drawing you into even more exciting adventures within the wizarding world. It’s going to be the perfect addition to Hogsmeade.”

The new attraction will replace the Harry Potter-themed Dragon Challenge coaster, which, prior to the opening of Wizarding World, was the non-Potter Dueling Dragons. Based on the exciting reveal, it sounds like Universal’s working on a much more heavily themed experience, something more in-line with the immersion-ratcheting Harry Potter and the Forbidden Journey and Harry Potter and the Escape from Gringotts. If this new coaster can even come close to rivaling those E-ticket rides, Potter fans are in for a treat that could stretch a child-like smile across Voldemort’s ugly mug.