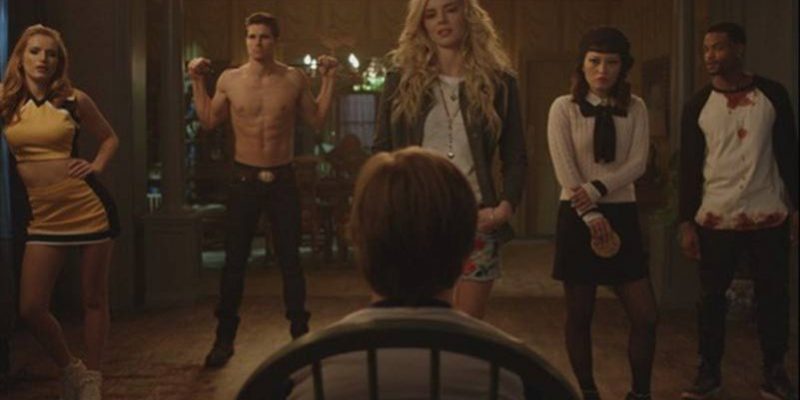 The Babysitter, a Netflix Original, is now available to watch on the streaming service, just in time for Halloween.

Directed by McG, The Babysitter, follows 12-year-old Cole (Judah Lewis), who falls in love with his hot babysitter Bee (Samara Weaving). He’s at the age where he doesn’t need a babysitter, but Bee is so attractive and seems to be one of the only people who gets him.

Cole doesn’t care that Bee will be staying over when his parents decide to go away for the weekend.

“My parents are going away again. I think they go to have sex, but it just makes me feel like they go to get away from me,” Cole tells Melanie on the school bus. “They’re definitely having sex. They’re probably having sex while you’re at home, too,” responds Melanie. She even goes as far as convincing Cole that’s what babysitters do. Cole insists that it’s not what Bee does.

But Cole doesn’t mind his babysitter staying over while his parents are gone for the weekend.

“Seriously, have you ever been awake after she’s fallen asleep? I dare you to stay up tonight. You’ll see, says Melanie.

One evening, Cole sees Bee and a group of teens (played by Bella Thorne, Andrew Bachelor, Robbie Amell, and Hana Mae Lee) playing a game of Truth or Dare. Things take a dark and violent turn when the group starts a cult ritual that promises to make all their dreams come true. But one human sacrifice isn’t enough, and the ritual also needs Cole in order to work. “Let’s get started before we head upstairs and get the blood of the innocent,” Bee tells her group of maniac friends.

Cole calls 911 but the police can’t get to his house fast enough. The babysitter and her crew sneak up to Cole’s room and inject drugs into his veins so he can be their next victim. What they don’t know is that Cole is awake and ready to escape. Can Cole survive the night against a bunch of teens out for blood?

The Babysitter, a Netflix Original, is now available to watch on the streaming service, just in time for Halloween.

If you enjoy watching cheesy teen horror-comedies with sexy characters, make-out sessions, and bloody scenes, you’ll be a fan of The Babysitter.  Watch The Babysitter now on Netflix.