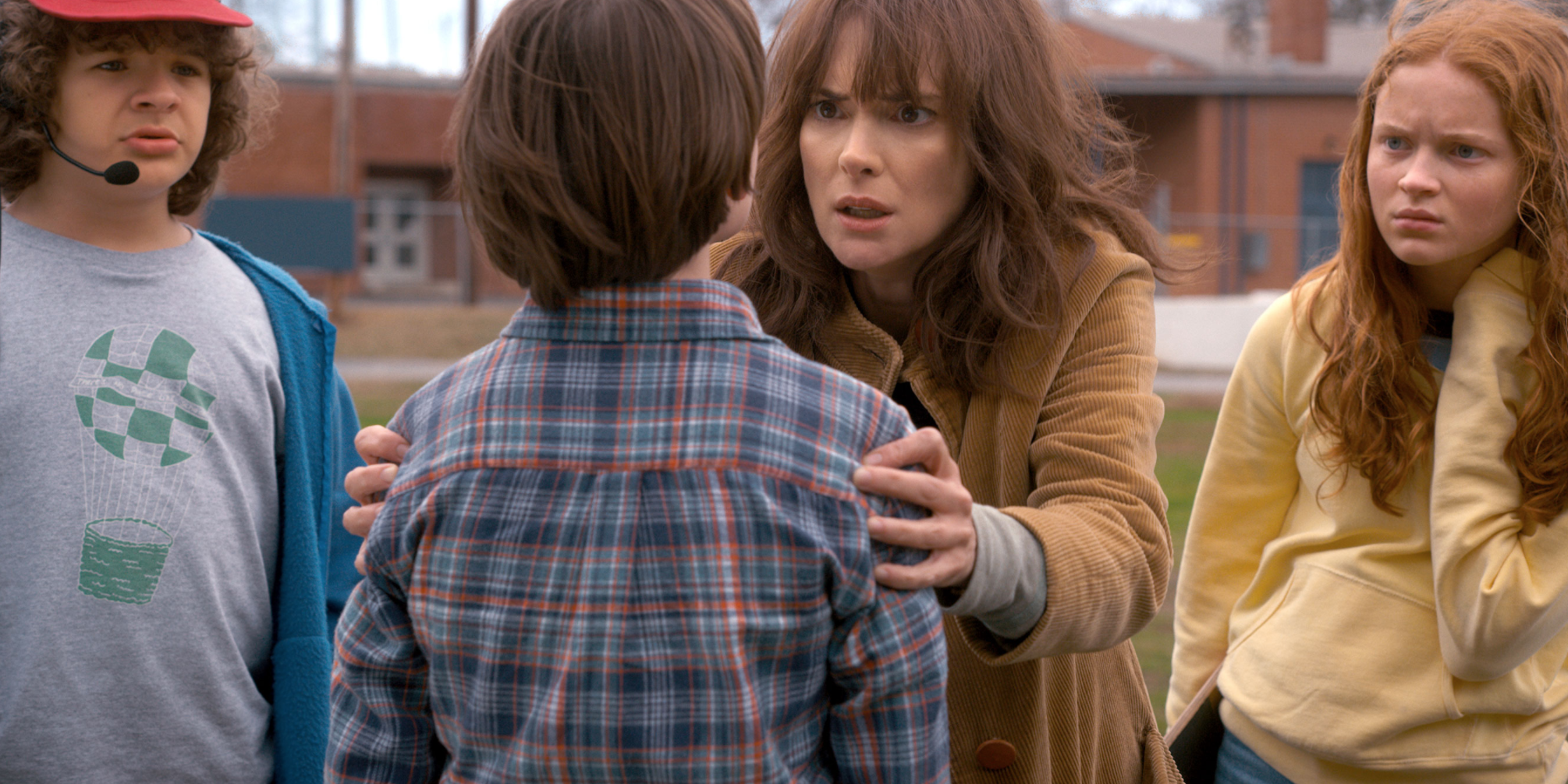 Stranger Things 2, Episode 4, starts off a bit hectic as Joyce is worried about her son, Will. She heads to Hawkins school to pick him up, but finds Dustin and the boys are looking for him.

“What’s going on? Where’s Will?” Joyce asks Dustin. Lucas frantically runs inside the school screaming, “the field!” She makes her way to the field where Will is having another episode, but this time it’s hard to wake him up. Will is battling the spider monster – he can’t move or speak because its tentacles are strangling him.

After what feels like the longest episode, Joyce is able to wake up Will. He’s in shock, so she takes him home, and does what she can to make him feel comfortable. She starting to believe that the episodes Will is having are real.

“These episodes that you’re having, I think Dr. Owens is wrong. I think they’re real. But..but I can’t help you if I don’t know what’s going on. So, you have to talk to me. Please. No more secrets, okay?

Will agrees to open up to his mom. “It came for me. And I tried. I tried to make it go away. But it got me, Mom. I felt it…everywhere,” cries Will.

Meanwhile, Hopper is upset at Eleven because she can’t even follow his three simple rules. Hopper grounds Eleven, but for her that just means no Eggos and no TV for a week. Eleven rebels, uses her powers, and destroys all of the windows in the cabin.

Dustin put D’Artagnan back in his tank. Though, he didn’t tell his friends who have been looking in the trash for Dart. Back in the AV Club, Mike tells the boys about when Will saw a dark shadow on Halloween night. Mike even believes that Dart is connected to the Upside-Down world.

Cutting school, Nancy and Jonathan, are waiting in the park to meet up with Barb’s mother to tell her the truth of what really happened. Barb’s mother never shows up, so Nancy and Jonathan leave the park. Jonathan’s car won’t start so the man who followed them asks if they want a ride. He ends up taking them to Hawkins Lab, where they meet with Dr. Owens, who wants them to keep quiet. Dr. Owens shows them the weeds in the Upside-Down world that are responsible for Barb’s death.

Back in the cabin, Eleven finds a box marked “Hawkins Lab” — which has information about her mother, Terry Ives, who claims the government kidnapped her daughter, Jane. Eleven blindfolds herself, holds a picture of her mom, and uses her powers to go discover more about her mom.

Eleven finds Terry sitting in a rocking chair mumbling, “three to the right. Four to the left.” Terry’s eyes open, looks at Eleven and whispers “Jane,” but it doesn’t take long before she disappears. Eleven then finds herself back in the cabin

Dustin goes back home to check on Dart, where he finds that he has managed to escape the tank. While picking up Dart’s skin he hears a loud screeching sounds. “What the hell? Dart? ” he says. Following the grunting sounds Dustin witnesses Dart eating his cat, Mews. Feeling petrified, Dustin realizes that Dart isn’t so cute after all now that he’s turned into a Demogorgon.

After digging for hours, Hopper discovers a tunnel underground, and finds out he’s in the Upside Down.