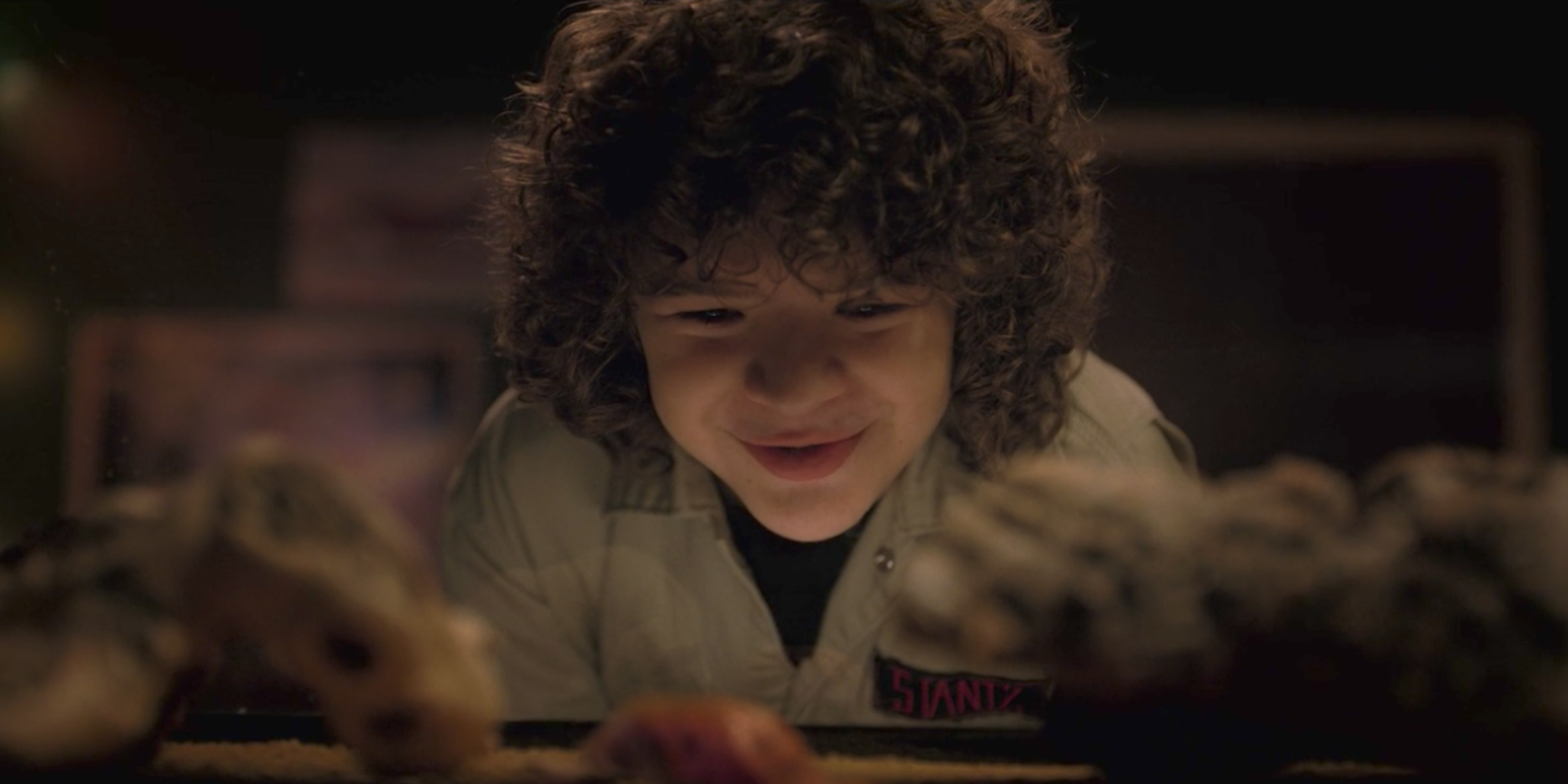 Dustin comes home with more than just candy on Halloween. He’s greeted by his mom, who can tell something’s wrong with him. She thinks he’s constipated but something strange is going on with his Ghostbusters chamber.

“Awesome, right? Yeah…I rigged the trap with, uh, a motor to make it look like I caught a ghost. Just like the movie,” Dustin tells his mom. Both Dustin and his mom laugh nervously while his Ghostbusters chamber continues to rattle. Dustin makes his way to his bedroom, where he removes his pet turtle and adds a lizard-like creature into the tank.

“You’re pretty cute, you know that?” Dustin tells the creature. He thinks his new pet is hungry so he offers some of his 3 Musketeers bar, which he then names the creature, D’Artagnan.

Back at school, Dustin is doing research on his newly adopted creature. He finds out he can’t check out any more books, so he steals them since he is on a curiosity voyage, and he needs his paddles to travel.

While walking in the hallway, Max wants to know why people call Will “Zombie Boy.” Lucas explained that when the police found a decomposed body in the water last year, they had a funeral for him. Max thinks Lucas is making this up but he makes it clear to ask anyone about it, but Will, since he’s sensitive.

During class, Dustin tells his friends to meet him at the AV Club, where he introduces them to D’Artagnan. Dustin explains he thought the creature was a Pollywog (another word for tadpole), The boys think Dustin may have discovered a new species.

In class, Mr. Clarke is telling the students about Phineas Gage, a railroad worker whose personality changed after a large metal rod was driven through his head. Phineas Gage survived the horrifying accident, but his injury changed his personality, according to Mr. Clarke. In this case, Will is the new Phineas Gage, especially since he hasn’t been feeling like himself lately.

Hungover from Tina’s Halloween party, Nancy’s upset because Steve didn’t pick her up for school. Why would he, after all of the things she said at Tina’s party? To make matters worse, she can’t tell Steve if she loves him. Nancy is still overwhelmed with guilt about what about what happened to Barbara in season 1. She convinces Jonathan that they need to tell her parents, everything.