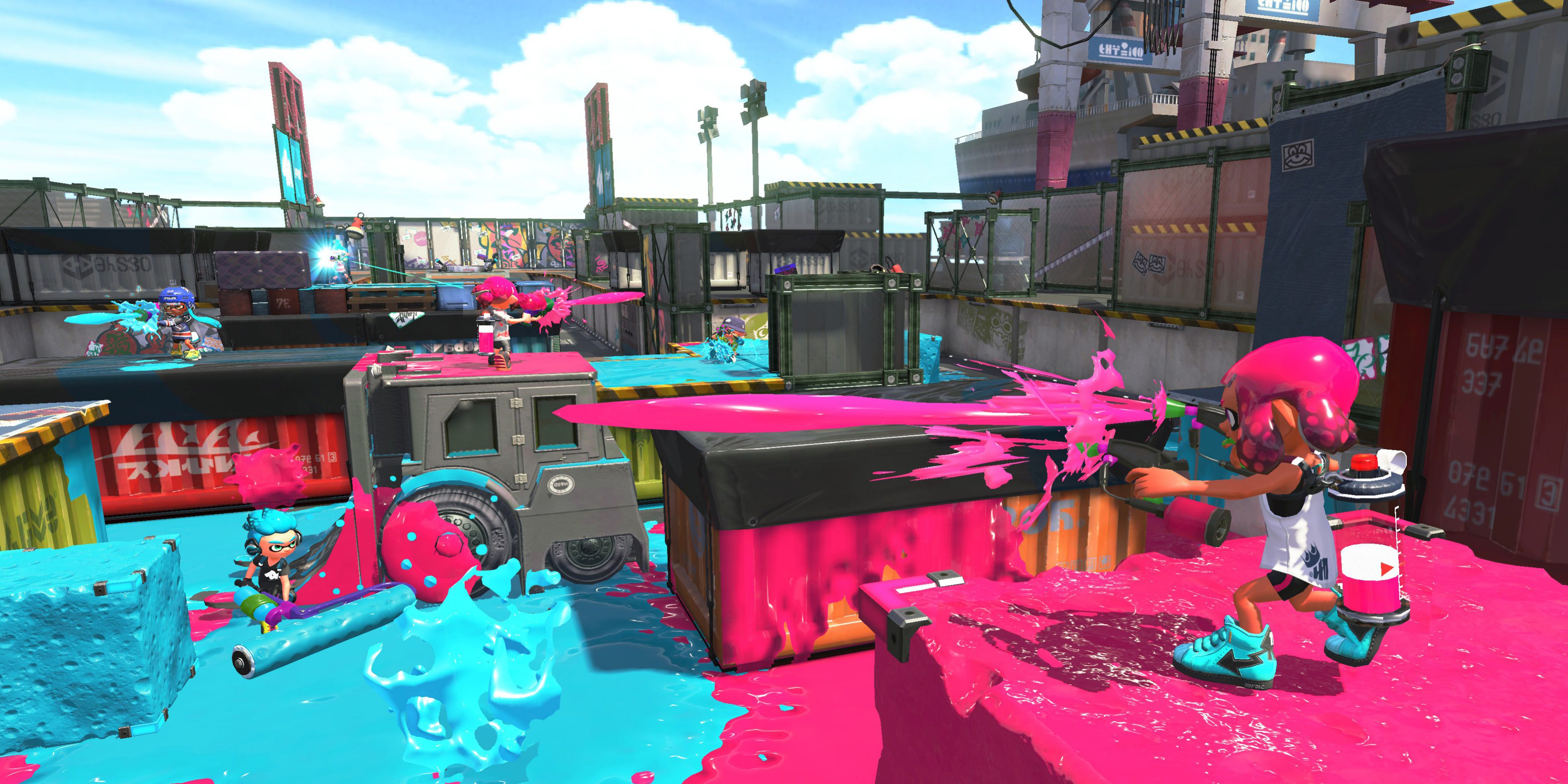 Like a blast of bright colored ink, 2015’s Splatoon put a fresh, vibrant spin on a genre that had been mostly dominated by military shooters and sci-fi fraggers. With its signature charm, imaginative level design, and spot-on mechanics, Nintendo managed to make an online competitive shooter that could be enjoyed by casual players and seasoned fans of the genre alike. Unsurprisingly, its Switch-exclusive sequel, Splatoon 2, doubles down on what made its predecessor such a novel success, while adding a number of fresh, welcome features and content.

Once again, players assume the role of Inklings, squid-like humanoids armed with an ink-spewing arsenal. As with the first entry, Splatoon 2‘s gameplay clicks right from the get-go. Whether you’re swimming through a sea of ink, blasting a big bad with bright blotches of the stuff, or attempting to paint a surface with splat-happy projectiles, the simple acts of moving and shooting are super-intuitive and endlessly satisfying.

It’s hard to appreciate this until you actually put your hands on the game, but players will feel it within seconds of diving into Splatoon 2‘s story mode. Deeper and lengthier than the first game’s single-player offering, the solo content is packed with creative encounters, from puzzle-like platforming elements to beyond-bizarre boss battles. I had far more fun than expected with the solo path, as it truly felt like a thoughtful, dedicated mode rather than a tacked-on training course for multiplayer.

Conquering this single-player story is a literal blast, but, despite its added depth and length, it still serves primarily as an appetizer to the multiplayer main course. Splatoon 2 is even more fun with friends, and whether playing cooperatively or competitively, you’ll find yourself spending the majority of your time online.

As in the original, you’ll invest much of your ink in covering your opponent’s turf in your team’s color, as well as using it to soak your live competitors in the goop. Objectives in modes, like fan-favorite Turf Wars, are straightforward, but clever map designs, distinct weapons, and interactive environmental elements allow for tons of tactical depth to be layered in. Leveling-up, learning new strategies, and unleashing ink attacks from increasingly cool, unlocked weapons keeps the action fresh, even if the core formula remains familiar.

Salmon Run, a horde-like mode that pits players against waves of standard baddies and over-the-top bosses — while players scramble to collect eggs — is the game’s most fun addition. On top of allowing you to play with—rather than against—friends, the mode offers a perfect balance of heart-pounding, frenetic action and team-based strategy. If the first game’s competitive focus wasn’t your cup of ink, Salmon Run’s dedicated cooperative play might be enough to hook you.

Splatoon 2 is a great addition to the Switch’s growing library, offering worthwhile options for solo, cooperative, and competitive players. If I had to gripe, I’d say it feels just a tad too familiar, in that it iterates more than innovates; it sometimes feels more like Splatoon Deluxe—a la Mario Kart 8 Deluxe—than a full-on sequel.

While it doesn’t seem quite as novel as its Wii U predecessor did two years ago, it sprays enough fresh ink over the tried-and-true template to make it a worthy edition to your Switch library. Whether you were a fan of the first, or are a new recruit wondering what all the fuss is about, Splatoon 2 is an easy recommendation.