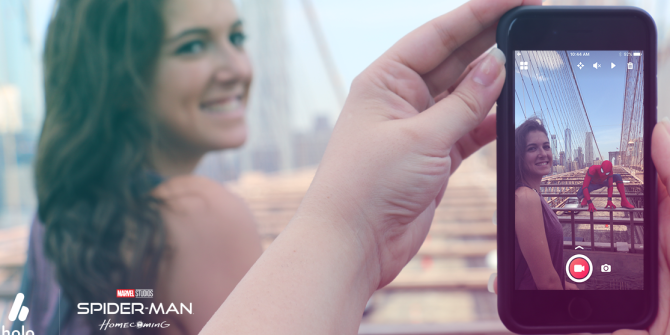 Just in time for Spider-Man: Homecoming‘s July 7th theatrical release, holographic capture startup 8i has released its Holo app for Android and iOS, in which any Spidey-fan can add Spider-Man holograms to their videos. But that’s just the beginning of what Holo promises to deliver, with a library of holograms to enhance videos without the need for a VR headset.

First announced in February, Holo is marketed as 8i’s take on augmented reality, a technology touched upon in more recent months (and popularized by games like Pokemon GO). Using a phone’s camera to capture video, the app allows the user to implement realistic 3D holograms of their choice into their recordings. 8i’s much-anticipated app has been stealthily developed for months, with the speculation that it would remove need to have a VR headset to enjoy their expansive library of holograms. A litany of partnerships and investors have followed 8i and Holo, to bring additional content to the app. A timely partnership with Sony means that the launch of the app conveniently coincided with the hype surrounding upcoming superhero film Spider-Man: Homecoming, which means fans of the famous web-slinging superhero can add him to their videos to tide them over until the film’s North American release on July 7th.

While hundreds of holograms are also available besides adding Spidey, and include, but are not limited to comedian Flula Borg, MMA star Anderson Silva, a Trump impersonator, an actual tiger, and a dog in a hot dog suit, all of the content is free! Whether or not it stays that way remains to be seen, but with 8i’s extensive corporate backing, we can expect to see loads more awesome holograms in the future – I’d consider it a win if I could get Spider-Man and the Vulture to duke it out for my niece’s birthday.

Holo is available for download from the iTunes and Google Play.