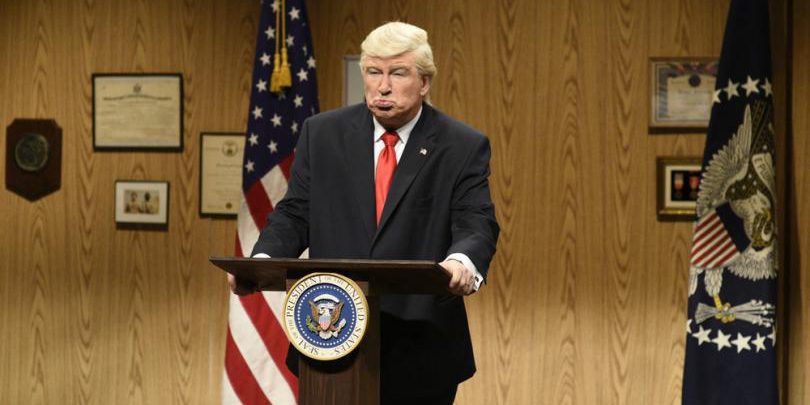 For a while it seemed like Alec Baldwin’s time as President Donald Trump on Saturday Night Live would come to an end after Season 42. Baldwin had hinted that he may not be able to reprise the role that propelled the series back into pop culture but on Tuesday, the actor announced his return.

Speaking with CNN in New York while promoting his movie Blind, Baldwin was asked if he would return. “Probably, a little bit of that. There’ll be a couple celery sticks of that. Not a whole meal… Yeah, we’re going to fit that in. I think people have enjoyed it,” he said.”

Baldwin’s latest comments echo what he has said before, hinting that he would make small appearances. During a May interview with The Hollywood Reporter, Baldwin who was only signed on for Season 42, commented on his future with the NBC series.

According to the actor, he would love to continue playing the commander-in-chief next season but said his availability may make that difficult. “Look, I’d love to keep doing this per my availability, but I have other things I’m going to do, so I guess we’ll figure it out,” he told THR.

But even with a busy schedule, which includes upcoming films, Baldwin still thinks there’s a way he can be featured on SNL. Baldwin told THR, “If I’m doing a film in Rome in the fall, you can bet I’m going to be on a satellite from Rome doing Trump.”

For those looking to get their SNL fix while they wait for the premiere of Season 43, NBC will premiere a four-week run of Saturday Night Live: Weekend Update beginning in August. “We’re thrilled to have Colin Jost and Michael Che continuing their unique brand of news with fresh Weekend Update shows in primetime this August,” the statement continued. The series will premiere on Thursday, Aug. 10 at 9 p.m. Season 43 of SNL is expected to premiere in late-September or early-October.