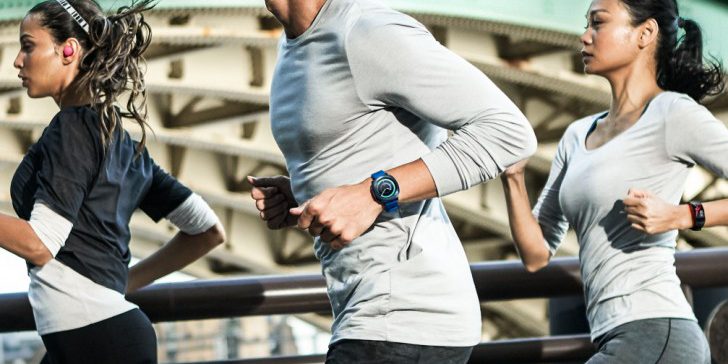 Samsung held a press conference today at the IFA trade show in Berlin, where the company announced a new smartwatch, the Gear Sport. The smartwatch is packed with features for people who care about their health and fitness.

As far as hardware, Samsung’s Gear Sport has a 1.2-inch circular AMOLED display with a resolution of 360 x 360. The screen is made of Gorilla Glass 3 which will give it protection, and has an always-on mode. The Gear Sport includes a built-in GPS, running features, and the ability to track your calories throughout the day.

Samsung’s Gear Sport runs on the Tizen operating system and is compatible with both Android and iOS devices.

Samsung’s new Gear Sport smartwatch is equipped with a dual-core processor, 4GB of storage, 768MB of RAM, Bluetooth 4.2, and NFC for Samsung Pay support. It also has a smaller 300 mAh battery, compared to the Gear S3 which has a 380 mAh battery life. How long does the Gear Sport battery life last? Samsung says the Gear Sport can last up to three days just from one single charge.

The Gear Sport bands are 20mm and come in a variety of colors. Samsung has also designed matching watch faces for the straps. Samsung hasn’t announced how much the Gear Sport will cost, but it will probably sell for $200-$350.