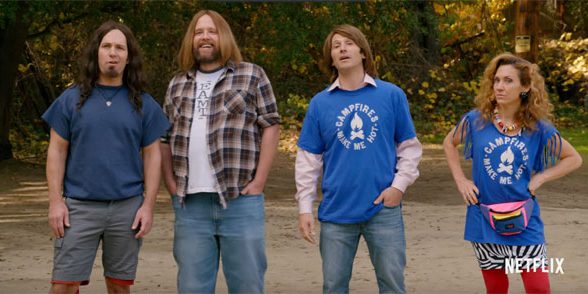 Wet Hot American Summer, the 2001 film, did not seem likely to inspire much of anything other than some laughs. It’s a good movie. Not great, but good. However, there are many who hold it in much higher esteem, which turned it into a cult classic. This cult status, and the major successes of many of the cast members of the film, led to the 2015 Netflix series Wet Hot American Summer: First Day of Camp. This was a delight, simply for existing. Part of the fun was in the actors playing younger versions of themselves 14 years later. Now, Netflix has dropped Wet Hot American Summer: Ten Years Later, which lacks a little of the panache, considering it’s only a couple of years we’ve been waiting, and because there isn’t the same inherent joke in these aging actors playing teenagers. That doesn’t mean it can’t be good, though, but was it?

I mean, yes. Yes it is good. If that’s all you want to know, now you know. I’m not here to make you wait to find out the answer. I watched all eight episodes in a row, Netflix binge style, over the weekend. The humor remains the same. It’s a dumb, silly show with a bunch of goofy jokes and a fair amount of meta humor. A lot of great comedy people are back, although Bradley Cooper is gone, having been replaced by Adam Scott (a change explained away as a “nose job” within the show). If you liked the previous Wet Hot American Summer outings, you’ll like this one, especially if you love Mitch the talking can of vegetables. This is the most Mitch we’ve ever seen.

As per usual, there is a major overarching plot, this time involving both Ronald Reagan (Michael Showalter) and George H.W. Bush (Michael Ian Black). It doesn’t really matter, though, as the show makes clear by the end. The whole thing plays off with a shrug, albeit a clever shrug. The show doesn’t care about plot. It only cares about jokes. The plot seems to only exist to be made fun of.

This time out, they made the wise decision to not bring the campers into the story as much. We briefly are involved in the battle between Deegs (Skyler Gisondo) the coolest kid in camp, and Paul Rudd’s Andy, the former coolest kid in camp, but that’s about it. With all due respect, who cares about a bunch of new kids when we could be watching Amy Poehler and Christopher Meloni like we have for three projects now? Although, two new adult characters played by Sarah Burns and Mark Feuerstein are added into the mix, with the assertion that they were there all along (they weren’t). Also, Alyssa Milano is along for the ride as a nanny who is seemingly a homicidal maniac. It’s a fun trope, although it really only pays off well a couple of times.

You can burn through Wet Hot American Summer: Ten Years Later in like three hours. That’s barely longer than a superhero film these days. I don’t think I laughed out loud as much at this show as I did at First Day of Camp, or the movie, but I think it was crafted better than the film or the first series. It really boils down to if you’ve liked the Wet Hot stuff you’ve seen before, you’ll like this. If you haven’t, you won’t. It’s a self-selecting style of comedy that is well-established at this point. Plus, and this is a bit of a spoiler, a can of vegetables has sex with a waitress in a kitchen. What more could you want really?