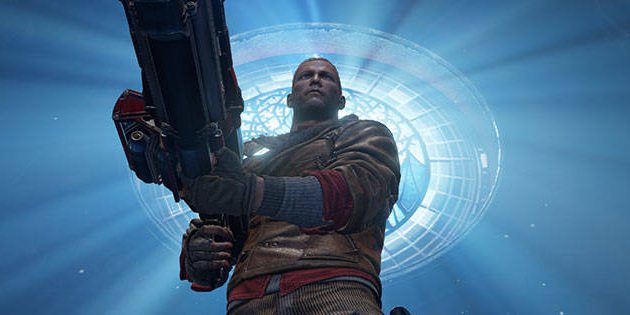 E3 2017 marks one year since Bethesda announced Quake Champions, the first main entry title in the series since 2005’s Quake 4. And while E3 has come and gone with no mention of a definite release dates, fans of the series can take some solace in the announcement of a new playable character to the lineup. In Bethesda’s latest trailer, notorious Nazi-stomping badass William “BJ” Blazkowicz of Wolfenstein fame puts his OSA training to the test.

Fans of Wolfenstein remember BJ as a US Army Ranger in World War Two and the top agent of the Office of Secret Actions. Blazkowicz blazed through the Wolfenstein series sniffing out and stomping down Nazi occultism as a one-man army behind enemy lines. After taking out his arch nemesis Deathshead, and falling into a coma for fourteen years, BJ awoke to a world conquered by the Regime. Not about to let over a decade in a vegetative state stop him, BJ awoke determined to amass a resistance to wipe out the Regime once and for all.

From the trailer and what Bethesda has revealed so far, “Terror-Billy’s” skills includes the ability to dual-wield any weapon in the game when activated. This effectively doubles the amount of damage that BJ can inflict, allowing him to blitz his way through any enemy with relative ease. In addition, BJ’s passive skill allows him to regenerate health when he isn’t taking damage in combat, as well as recovering a small amount of health when out of the fight for at least three seconds.

Quake Champions had been reportedly experiencing setbacks in production, particularly concerning whether the game would be free to play or paid. While Bethesda has settled on the former, Ranger is the only confirmed free playable character, which means that BJ will be available to buy once the game is formally launched.

No official release date has been set for Quake Champions; the ongoing closed beta is still available for sign-up.