Some of the best and most universally loved television shows have been produced in the U.K.. With popular streaming services like Netflix, it’s easier than ever to stream television shows from other countries. British television exports made a whopping $1.97 billion last year. The United States is the top market for UK exports, with other English speaking countries like Australia and Canada following behind. In 2020, the revenue from the American market was $649 million. France is the largest market when it comes to non-English speaking countries. When a TV show performs well domestically, it’s only natural that a studio wants to create that same success in other countries. Let’s take a look at some of the most popular UK television shows that have successfully made their way abroad.

This British historical drama is set in the early 20th century. The series first premiered in the United Kingdom in 2010, and continued until 2015. The setting is in the fictional Yorkshire country estate of Downton Abbey. It chronicles the lives of aristocratic Crawley family and their domestic servants. The show depicts major historical events including the sinking of the Titanic, the start of the first World War, and the Spanish influenza pandemic. Downton Abbey was very well received by audiences and critics alike. The series won a Golden Globe Award for Best MiniSeries or Television Film and an Emmy for Outstanding Miniseries or Movie. It even earned the most nominations for an international television series in the history of the Emmy Awards. A film adaptation of the series was released in 2019. According to research from Betway, Downton Abbey, Doctor Who and Planet Earth contributed a whopping 70% of export sales, surpassing £1 billion! 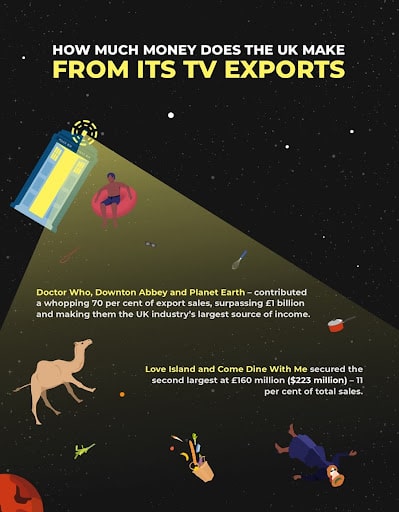 Doctor Who is a British series in the science fiction genre. The show is a major icon of British pop culture, and it has gained a cult following in other countries as well. Fans of the show sometimes refer to themselves as “Whovians”. Doctor Who first aired in 1963 and has had 13 different actors play the lead role over the course of the show. It made the Guinness World Record for the longest running science fiction tv show in the world. The character of Doctor Who is an extraterrestrial being who has the appearance of a human and the ability to time travel. He explores the universe in his time travelling spaceship, the TARDIS. The success of the show is clearly indicated by the number of spin offs, comic books, novels, etc. that have been inspired by the series.

This BBC series premiered in 2006. The nature documentary series was the most expensive to ever be commissioned by the BBC. The series received numerous awards, including 4 Emmys. It premiered in 2006 in the UK, and by 2007 it had been shown in 130 countries. The series contains 11 episodes, each featuring a different habitat or biome on Earth. Planet Earth II, a six part sequel, was commissioned 10 years later. Planet Earth III is set to air in 2022. Audiences were particularly impressed with the epic scale and high quality of the Planet Earth documentaries. A feature film version of Planet Earth, called Earth, was released around the world from 2007-2009. BBC sold the Planet Earth series to several overseas broadcasters, including the Discovery Channel for the United States and the Australian Broadcasting Corporation.

The series premiered in America in March of 2007, featuring Sigourney Weaver as the narrator. Episodes feature different regions such as the Arctic, mountains, caves, deserts, jungles, and oceans. This educational series is highly regarded and very successful. The popularity of Planet Earth has even sparked success with merchandise including books, calendars, games, cards, and more. The Planet Earth DVDs became the fastest and best-selling documentary DVD’s in America in the history of the Discovery Channel.

First made popular in the UK, The Office now has an extremely well known American version. The British Office series premiered in 2001. Ricky Gervais stars in the show, which he also helped write and produce. In a format known as “mockumentary” or “docu comedy”, The Office follows the daily lives and interactions of co-workers who work for a paper company called Wernham Hogg. The series has become one of the most successful British comedy exports and has been sold to broadcasters in over 80 countries. The American remake is a highly successful, Emmy winning series starring Steve Carell. In a similar fashion as the UK version, the show follows the lives of the employees of the paper company Dunder Mifflin. The star of the show is Michael Scott, the goofy and often socially awkward manager of Dunder Mifflin. The show also follows the love story between two of the employees, Jim and Pam. The Office ran for 9 seasons in America. With its relatable scenarios and loveable casts, both versions of The Office are highly enjoyable.

The Great British Bake Off

This UK television baking competition features a group of amateur bakers who compete against each other in various rounds to show off their baking skills to the judges of the competition. One contestant is eliminated in each round, until the final winner is chosen in the finals. The show first premiered in August of 2010, and new episodes are being produced to this day. The Great British Bake Off sparked a number of spin offs and specials, such as Junior Bake Off where the contestants are young children aspiring to be professional bakers. The show is credited with sparking a love for home baking, with stores in the UK reporting sharp increases in the sale of baking tools and ingredients since the show first aired. It is now a popularly streamed show on Netflix.

This dating game show first premiered in the UK in 2005, but it was then called “Celebrity Love Island”. In this first version of the show, 12 celebrity contestants spent five weeks on an island in Fiji. Each week, viewers of the show would vote off the celebrities, and in the second season, it was up to the celebrities. The celebrity version of the show only lasted until 2006. However, Love Island made its comeback in 2015, this time without the celebrity element. The game show features a group of contestants, referred to as “Islanders” who live together under constant video surveillance. On the first day, the contestants choose who they would like to be coupled with, and those couples change over the course of the show. In the end, the winning couple receives a cash prize of $100,000. The American version of Love Island premiered in 2019. You can stream the popular reality show on Netflix.

Who Wants to Be a Millionaire

This British game show ran from 1998 to 2014. The television quiz show tested players’ knowledge with trivia questions about various topics. Created by David Briggs for ITV, the game show was popular with British audiences. Contestants won cash prizes for each correct multiple choice answer, with the ultimate prize being 1 million dollars. The show was a very popular part of British culture, and it was ranked 23rd in a list compiled by the British Film Institute of The 100 Greatest British Television Programmes in 2000. Much like other shows on this list, an American adaptation later appeared. The American Who Wants to Be a Millionaire first aired in 1999 and is still in production today.

So which television shows have been the biggest money-makers in the UK? Having been licensed to 26 international markets, The Great British Bake Off is one of the top earners. As for the most viewed tv show, The Office is highly rated. It was the most viewed Netflix show in 2020, accumulating 57 billion minutes of streaming in that year alone. Dancing with the Stars (or Strictly Come Dancing as it’s called in the UK) has generated 500 million viewers worldwide.

As far as genres go, reality and game shows are among the top performing genres for British television. Shows like The X Factor and Who Wants to Be a Millionaire have done extremely well across the globe. British period dramas have also been a hit.

Some would argue that the American versions of certain British shows are better than the original. Take The Office, for instance. The American adaptation ran for an impressive 9 seasons and went on to be one of the most streamed shows on Netflix. The U.S. version’s 2020 reboot of Who Wants to Be a Millionaire had an average viewing audience of 5.6 million and a finale viewer count of 6.5 million.

Television and media revenue is only expected to keep rising in the UK in the next 5 years. There has been a recent increase in both the quality and quantity of UK shows, and they have proved to perform well in other countries’ markets as well. The rise of streaming services and subscription programs has made a big difference in revenue, and will continue to grow. The UK has produced many universally loved television shows in the past, and the future of the industry looks bright.