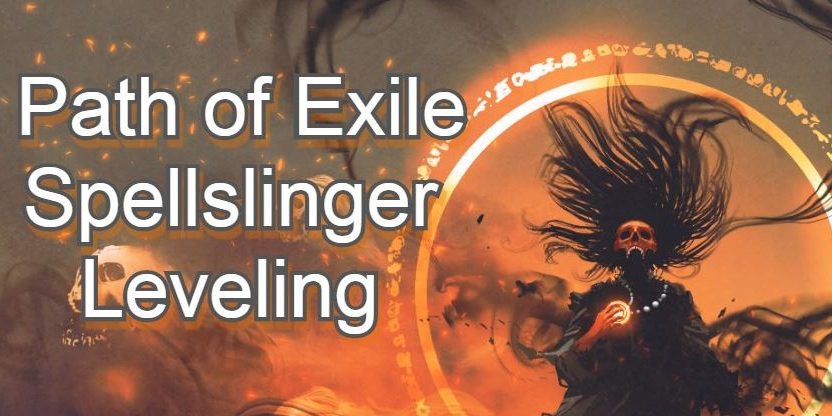 The Spellslinger build is one of the more convenient staple meta setups within the Path of Exile community. Convenience, however, does not mean beginner-friendliness as it can be quite tough to level up if you don’t know what you’re doing or don’t have enough PoE Currency. For that, here’s a short guide on how to effectively build this deadly death-dealer.

Before we go into the leveling process, let’s first bring up what the build is all about. As the name suggests, the Spellslinger build is entirely centered on the namesake support gem. What it does is that it lets you automatically cast by chance the active skill gem it supports at the cost of reserving a certain amount of mana. The amount of mana reserved depends on the active skill gem being supported.

The most common class for this is the Necromancer, so it only follows suit that the most common active skill paired up with it is Volatile Dead. This spell uses up a nearby corpse to summon an orb that locks in on enemies, dealing AoE damage upon contact. Coupled with Spellslinger’s triggering, the standard Volatile Dead build becomes a convenient PoE build with amazing clear speed.

Before Getting the Core

Now onto the leveling proper, which doesn’t actually begin until level 24, as that’s the level requirement for Spellslinger. There’s hardly a need for a guide to get to that level. Plus, you’ll be getting the gem at Act 3, which can be quite some time. For the moment, you’ll have to make do with whatever spells you got and play the game like any other newbie, making the most of what they have until they get better gear and items.

That is unless this is already your second and even third character. If that’s the case, then you can just buy from PoE Trade using PoE currency, or give your secondary Necromancer character the gems and gear it needs.

Other than the regular grind as well as the skill gems and gear you need to have, there are also a few build choices you’ll have to make.

For the most min-maxed build, here are the choices you’ll have to go with:

Going By the Numbers

Once you get to 24, you’ll be spellslinging the usual offensive spells until you’re 60. The most popular candidates are Orb of Storms and Frost Bomb, Freeze Pulse, and Arc. If you prefer pure damage, then you’re better off with lightning spells, while ice spells would be your best choice if you prefer a bit of utility. Then again, you won’t need to slow down your enemies if they’re already dead in the first place.

Although you can already use Volatile Dead at level 12 (and therefore even without Spellslinger), we recommend that you only start pairing it up with the core skill gem once you have completed all the necessary passives on your Necromancer ascendancy. You’ll be able to get your ascendancy at level 50, and by level 60 you’ll have all the passives you need.

They are as follows:

Of these four, the most important two are Corpse Pact and Plaguebringer, in that order. The former increases the maximum life of corpses, and therefore the damage they deal, as well grant increased damage and cast speed upon corpse consumption, and cause chill and shock to nearby enemies. The latter, on the other hand, increases AoE when a corpse is consumed.

Once you’ve already set the basics of the PoE build, you can now play the way it’s intended to be until you hit the cap and go for the endgame. Hopefully, you have a breeze on your way to Wraeclast’s more challenging PVE content.