‘The Orville’ Renewed for Season 2 by Fox 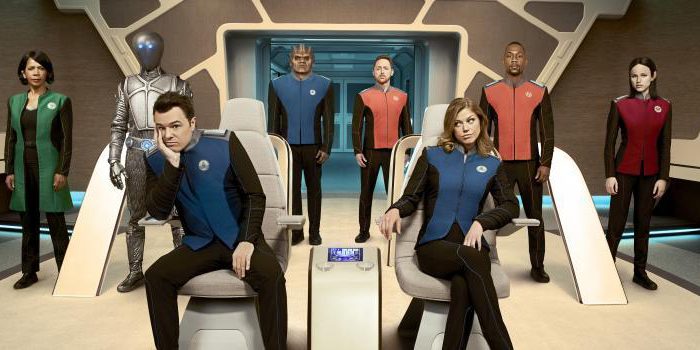 Seth McFarlane’s send-up of ’90s-era Star Trek survives for another year. Fox has renewed The Orville for a second season, making it the first of Fox’s 2017 freshman series to be renewed.

“Once again Seth has struck a powerful chord with viewers,” said Michael Thorn, president of entertainment, Fox Broadcasting Company. “He has delivered a series full of optimism, drama and his trademark humor. We want to thank him and the rest of the talented cast, as well as the producers and crew, for an incredible first season. We can’t wait to see where The Orville travels in the second.”

Seth McFarlane is also the creator and star of Family Guy, Fox’s long-running animated hit. The 44-year-old actor/writer/director/producer also created and starred in the series American Dad! and The Cleveland Show, as well as the movies Ted and A Million Ways to Die in the West. He has also been an outspoken critic of sexual predators in Hollywood, often making pointed jokes about them in his shows or when hosting the 2012 Oscars.

The Orville has surprised fans by feeling more faithful to classic Star Trek series than CBS’s own new Trek series, Star Trek: Discovery. While the science fiction show has comedic elements (and McFarlane’s sometimes sophomoric sense of humor), its plotlines have tackled weightier topics and social commentary, such as gender identity and social media.

Oddly enough, Fox categorizes The Orville as a drama, though I doubt most people who’ve watched an episode would agree. The Orville’s series premiere pulled in 14 million viewers across all platforms, according to Fox, making it Fox’s most-watched and highest-rated series launch since the 2015 debut of Empire. The Orville also ranks among the top three new dramas of the Fall 2017 TV season, averaging a 2.5 rating in the 18-49 year old demographic.