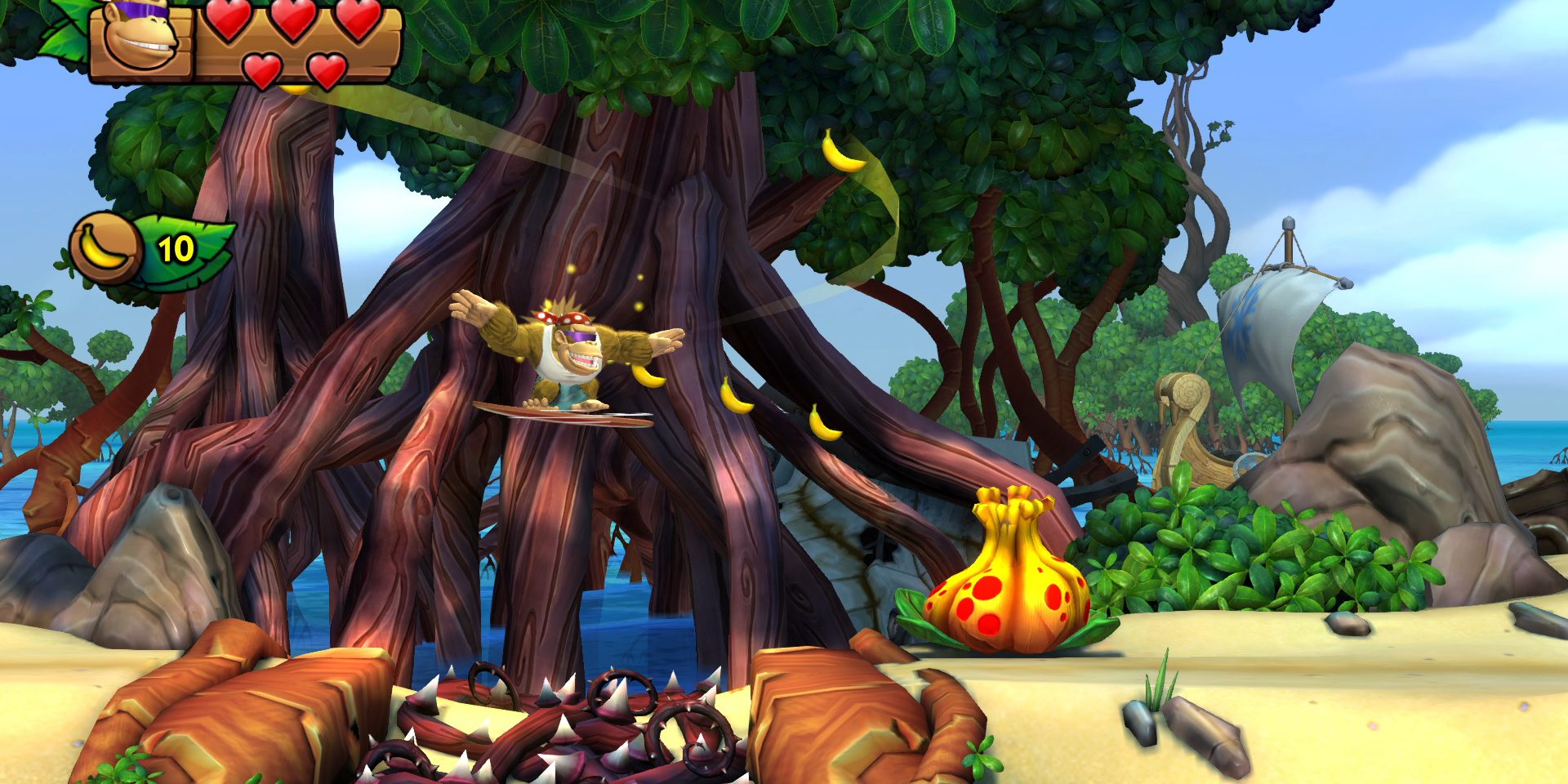 “Nintendo Switch is the fastest-selling home console in history, and Nintendo is not taking our foot off the gas in 2018,” said Doug Bowser, Nintendo of America’s Senior Vice President of Sales and Marketing.

Below is a list of the games and descriptions straight from Nintendo’s release. You can also watch the full Nintendo Direct mini presentation here.

DARK SOULS™: REMASTERED: The first title in the genre-defining action role-playing franchise is coming to Nintendo Switch. DARK SOULS: REMASTERED includes the Artorias of the Abyss DLC, as well as improved framerate and resolution from the original DARK SOULS game for an exhilarating return to Lordran. This marks the franchise’s debut on a Nintendo platform, and now for the first time ever, this revered (and challenging) game can be played on the go. DARK SOULS: REMASTERED launches on May 25.

Mario Tennis Aces: A new Mario Tennis game is bringing a new level of skill and competition to Nintendo Switch. Mario steps onto the court in classy tennis garb for intense rallies against a variety of characters in full-blown tennis battles. New wrinkles in tennis gameplay will challenge your ability to read an opponent’s position and stroke to determine which shot will give you the advantage. And this time the game adds the first story mode since the Mario Tennis game on Game Boy Advance, offering a new flavor of tennis gameplay, with a variety of missions and boss battles. The game launches for Nintendo Switch this spring.

Donkey Kong Country: Tropical Freeze: Donkey Kong, Diddy Kong, Dixie Kong and Cranky Kong return for the franchise’s debut on Nintendo Switch. This title includes all the fun and challenge of the original game, plus a new beginner-friendly mode that lets players enjoy this critically acclaimed adventure as groovy surfing simian Funky Kong. Funky Kong can double jump, hover, perform infinite rolls and even perform infinite underwater corkscrews. Thanks to his sturdy surfboard, even spikes can’t slow him down. The game launches for Nintendo Switch on May 4.

Kirby Star Allies: Kirby’s debut on Nintendo Switch is a grand new adventure packed with content. The new Artist ability lets Kirby unleash his creativity, while the new Spider ability lets him ensnare enemies in webs. Kirby also can hurl new friend hearts at enemies to win them over with love and add them to his party. Plus, up to four friends* can team up and combine Kirby’s unique abilities with ally abilities for powerful new Friend Abilities. The game launches for Nintendo Switch on March 16.

The World Ends with You: Final Remix: This 2008 Nintendo DS game has been updated for Nintendo Switch with HD visuals and a new epilogue that sheds new light on the game’s story. Players can join rhythmic battles using either Joy-Con controllers or the Nintendo Switch touch screen. The game is scheduled to launch this year.

Hyrule Warriors: Definitive Edition: A new, ultimate version of the exhilarating action game set in the Zelda universe will include every map and mission, plus all 29 playable characters from both the Wii U and Nintendo 3DSversions of the game, along with all of the previous paid downloadable content. Play as Link, Zelda, Midna, Skull Kid and dozens more in action-packed battles at home or on the go. Additionally, the game includes new outfits for Link and Zelda based on The Legend of Zelda: Breath of the Wild game. This new version launches for Nintendo Switch in spring.

SNK HEROINES ~Tag Team Frenzy~: Play as iconic heroines from SNK’s history in a new, two-on-two tag-team fighting game. Players can activate a variety of Special Moves with the press of a button, and make use of special items to turn the tide of battle. One of the competitors will be Yuri Sakazaki from ACA NEOGEO Art of Fighting 2, which launches today in Nintendo eShop on Nintendo Switch. SNK HEROINES ~Tag Team Frenzy~ launches on Nintendo Switch this summer.

Ys VIII: Lacrimosa of Dana: When the passenger liner he was aboard sank, the adventurer Adol drifted to a deserted island inhabited by vicious creatures that have evolved in many different ways. To survive, Adol must gather fellow shipwreck survivors and build a base. High-speed battles require players to change between three types of characters at a moment’s notice. The epic RPG launches for Nintendo Switch this summer.

PAYDAY 2: As players join with friends* locally or online to execute elaborate heists, full touch-screen support makes menu navigation easier than ever, while the HD Rumble feature lets them feel everything from explosions to weapon recoil right in their hands. Debuting in the Nintendo Switch version of the game, a new playable character named Joy will be introduced. Joy is a Japanese computer whiz who wears a custom LED light mask that changes her appearance as she sees fit. PAYDAY 2 launches for Nintendo Switch on Feb. 27.

Fe: In this new type of platforming adventure, players run, climb and glide their way through a dark Nordic forest to explore its living, breathing world. Use the motion controls of the Joy-Con controllers to sing in tune with creatures and plants to unlock new abilities. Each song has a distinct sound and feel thanks to HD Rumble. The game launches digitally for Nintendo Switch on Feb. 16.

Celeste: This modern take on the pure action platformer lets Madeline climb any surface on Celeste Mountain if she has the stamina. Playing in Assist Mode lets players tweak the difficulty, from a slower pace to full-on invincibility. Unlockable B-side chapters offer even more challenging adventures. The game launches digitally for Nintendo Switch on Jan. 25.

Super Mario Odyssey: A new mini-game called Balloon World is coming to one of the highest-rated games of all time. Once players download the free update and complete the main story, Balloon World will become available. In “Hide It” mode, players have a certain amount of time to hide a balloon. In “Find It” mode, players have the same amount of time to locate balloons hidden by other players from around the world. Players can move up the rankings** by finding hidden balloons and becoming expert hiders. The free update will be released in February with new Snapshot Mode filters and new outfits.

Mario + Rabbids Kingdom Battle: A new hero swings into action! Donkey Kong is headed to the game as a playable character, complete with an exclusive new storyline and world to explore. The DLC pack will release in spring and will be available for purchase individually, or as part of the Season Pass or Gold Edition of the game.

Pokkén Tournament DX Battle Pack: The Battle Pack is now available for purchase in Nintendo eShop on Nintendo Switch and includes two Waves of Battle Pokémon and Avatar items. Wave 1 of the Battle Pack contains Battle Pokémon Aegislash and a new Support Pokémon Set featuring Mega Rayquaza and Mimikyu. Aegislash can change between two formes, and players can wield them both. Wave 2 includes the new Battle Pokémon Blastoise and a new Support Pokémon Set featuring Mew and Celebi. Wave 1 will be available Jan. 31, and Wave 2 is scheduled for Mar. 23.