Netflix’s ‘You Get Me’ Review: Holly’s Obssession With Tyler Becomes Dangerous 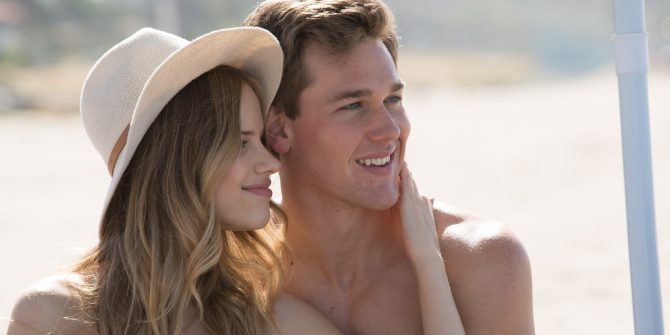 The Netflix original movie You Get Me stars Taylor John Smith as Tyler, a high-school student who is madly in love with his girlfriend Ali (Halston Sage).

Summer is coming to an end, and after getting into a fight with his girlfriend Ali at a party, Tyler has a one night stand with Holly (Bella Thorne), a girl from out of town. Like most teens who break-up, but still remain madly in love, Tyler gets back together with Ali.

Holly thought she had something “special” with Tyler, so she becomes dangerously obsessed with him, and goes as far as transferring to the same high school.

“So I see you got back with your girlfriend. That’s good. Did you tell her about us?” Tyler responds by saying, “No, and I’d appreciate it if we didn’t make it a thing.” Holly acts innocent and says she can be very “discreet”.

During a break, Tyler, Halston, Nash, and Anna all hangout. Halston reaches out and invites Holly to hangout, which is Tyler’s worst nightmare. Holly starts to share details about her one stand with Tyler, at the beach but Halston is oblivious. After a sleepover with Holly, Ali talks to her friend Anna about her experience getting to know Holly. “She’s cool. We stayed up all night talking and she’s actually kind of nice. It was a little weird, though. I woke up Sunday, and she was just gone.” Anna tries to explain she has a weird feeling about Holly, but again, Ali ignores her adding, “hey, you’re sounding like my mom.”

Holly catches on and finds out that Anna knows there’s something not right about her. Holly spikes Anna’s smoothie and comes close to having a deadly allergy attack. From here, viewers really get to see how crazy Holly’s character can be.

Actor Taylor John Smith and actress Halston Sage aren’t the best in this Netflix original, but Bella Throne was the perfect person to play a crazy girl in Netflix’s original You Get Me. Most of the events are pretty repetitive in this suspenseful series, but it’s much better than forcing yourself to watch Netflix’s Friends From College.