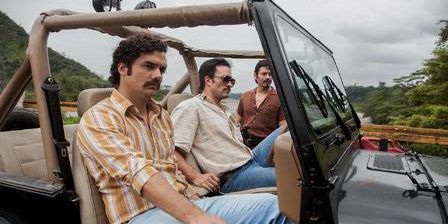 Netflix original series Narcos doesn’t return until September 1st, but fans needn’t wait that long to see what the critically-acclaimed drama has in store for its third season of cartel-combating action. Today Netlix took the wraps off a trailer highlighting what viewers can expect from the next run of episodes and, unsurprisingly, the two-plus minute video is brimming with blood, guns, stacks of cash, and plenty of white powder. Oh, there’s also a refrigerator full of blood-soaked body parts–pause at the 1:27 mark for a good look.

Along with unveiling the trailer, Netflix provided the following season 3 synopsis and character breakdowns.

Now that the bloody hunt for Pablo Escobar has ended, the DEA turns its attention to the richest drug trafficking organization in the world: the Cali Cartel. Led by four powerful godfathers, this cartel operates much differently than Escobar’s, preferring to bribe government officials and keep its violent actions out of the headlines.

Just as Gilberto announces a bold plan to walk away from the business, DEA agent Javier Peña (Pedro Pascal) enlists the help of American and Colombian law enforcement to take it down. This season opens up a complex and ruthless world of new figures.

Other new players include: