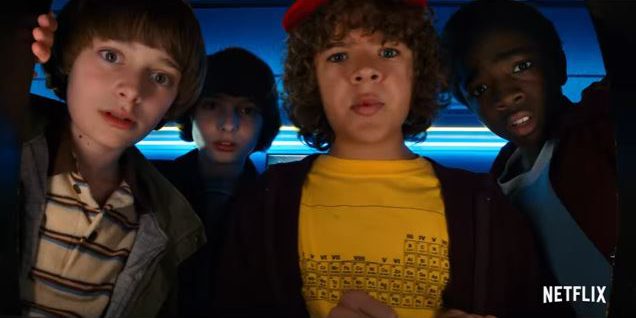 The following may contain spoilers for Stranger Things – read on with caution.

Only a few weeks after the release date for Stranger Things Season 2 was announced, Netflix has released a brand new, full-length trailer, chock full of new footage and insight into the next adventure in the popular show – all set to Thriller, no less.

Life has seemingly settled down some in Hawkins, Indiana, a year after the events of the first season. Mike, Will, Lucas, and Dustin have resumed their life of movies and video games. But while Will Byers has escaped from the Upside Down, the trailer makes it clear that what lurks in the other dimension isn’t quite done with him. Flashes of the apocalyptic world from which he had been trapped and rescued show Will a gigantic, terrifying apparition in the sky, and the reminder that the gate between his own world and the Upside Down was never closed – and he alone can see what’s coming

Meanwhile, life for the other affected residents of Hawkins is far from ordinary. Nancy and Steve’s relationship may have hit some turbulence, sending her back to the side of Jonathan Byers. Jim Hopper has his hands full keeping the events of the last year under wraps while signs that the Upside Down is encroaching into our world are spreading. Mike is still reeling from the loss of Eleven, who might not be as dead and gone as he thinks.

Details about the next season are still sketchy at best, but the new trailer expands on the details that we already have – that life has certainly not settled down in Hawkins. The door to the Upside Down hasn’t closed. And something much bigger than the demogorgon is on the other side.

Stranger Things Season 2 premieres in its entirety on Netflix on October 27th, 2017. You can catch the new trailer below.