Matthew McConaughey And Stephen Colbert Performed An ‘Exit 57’ Sketch Together 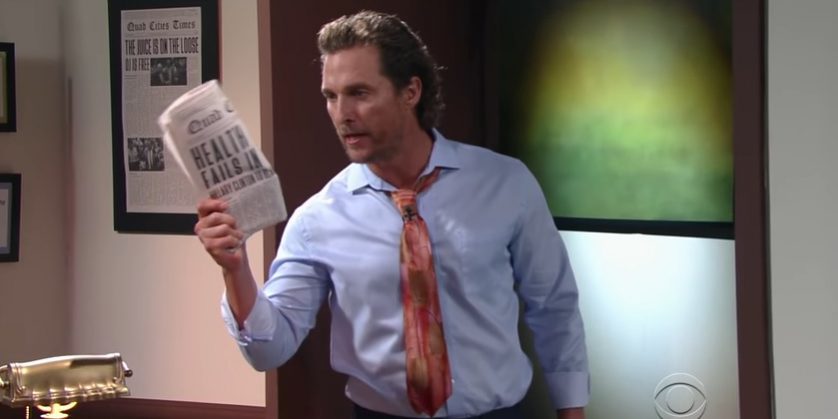 Matthew McConaughey is one of the biggest movie stars in the world. He’s been named the sexiest man alive. He’s starred in searing, dark dramas like True Detective and Dallas Buyers Club, the latter of which he won an Oscar for. However, if you were to ask McConaughey to describe himself, he might just say “The world’s biggest Exit 57 fan.” At least, that’s the assumption based on his appearance Monday night on The Late Show with Stephen Colbert.

Now, you might be asking, “What’s Exit 57?” and nobody would blame you. It was a sketch show that aired on Comedy Central for 12 episodes spanning 1995 and 1996. It starred, amongst other, Colbert, Amy Sedaris, and Paul Dinello, who would all go on to star on Strangers with Candy. There are a fair amount of people who remember that show, it’s a cult classic, but it would be a stretch to even give Exit 57 the “cult classic” label. There is at least one person who remembers, and loves, Exit 57 though, and that’s McConaughey.

Not only did McConaughey proclaim his love for the short-lived sketch show to Colbert, and Dinello who works on The Late Show, but he was given the chance to perform a sketch from Exit 57 on the show. Yes the most-popular late night show on television in 2017 featured the performance of a sketch from a Comedy Central show barely anybody remembers…and an Oscar winner took part.

Unsurprisingly, given the talent behind Exit 57, the sketch holds up and remains really funny. Check it out below.