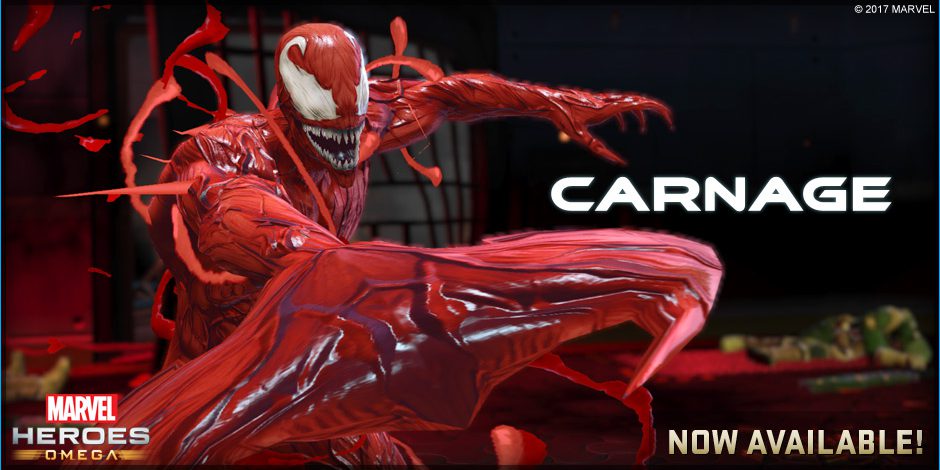 Marvel Heroes Omega is celebrating Spider-Man’s homecoming by bringing in new Spidey-themed content – and bringing in Carnage right behind it on PC.

Marvel’s superhero ARPG/MMO made the jump from PC to console back in late June, three years after its initial release. Developer Gazillion made the promise at the game’s initial release to deliver continuous content updates and playable characters. To that end, in celebration of the release of Spider-Man: Homecoming, the web-slinging superhero is swinging into action across all of the game’s supported platforms with a new Daily Bugle Operation starring the Sinister Six, as well as a roof-top boss encounter with the film’s primary baddie, Vulture. That covers the content update end of the bargain. The playable character end is coming to PC in the form of Spidey’s most notorious antagonist and supervillain, Carnage. Dee Bradley Baker reprises his role as Cletus Kasady joins the fray as one of the game’s playable villains, but this time, he’s fighting with the heroes…sort of. The events of Axis may have swayed him but that doesn’t mean Carnage’s violent killer instinct has toned down any, as he harnesses the power of his symbiote to cut swaths of brutal, bloody destruction through any enemies in his path.

Carnage is just one of over a hundred playable Marvel heroes and villains in the Marvel Heroes Omega lineup, in a game that brings the action RPG experience to the world of MMOs. The game, released in 2013, brings in tons of replay value with multiple characters, costumes, rewards, and hours of character development, with new challenges coming in with each regular update.