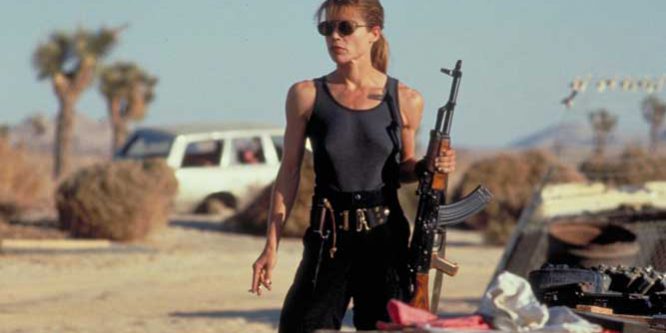 The original Terminator and Sarah Connor will meet one more time. According to The Hollywood Reporter, Linda Hamilton has signed on to play Sarah Connor in the upcoming untitled Terminator sequel that will be co-produced by franchise creator James Cameron.

Linda Hamilton starred as Sarah Connor in the original Terminator (1984) and its sequel Terminator 2: Judgment Day (1991). Story details haven’t been revealed about this sequel, the first to involve Cameron since Terminator 2, but we know that Arnold Schwarzenegger will also be returning. It’s unclear whether he’ll once again play the android killing machine or another character, though rumor has it that he may play the human on whom the Terminator’s likeness is based.

Cameron says that the 60-year-old Hamilton’s return will be a boon to how gender is perceived in action flicks.

“There are 50-year-old, 60-year-old guys out there killing bad guys,” he said, referring to aging male actors still anchoring movies, “but there isn’t an example of that for women.”

Coincidentally, Jamie Lee Curtis was recently cast in the next Halloween sequel, returning to her iconic role as Laurie Strode. Curtis will be almost 60 when that film releases late next year.

Cameron will regain rights to the Terminator franchise in 2019 and has said that he would like to “reinvent” the franchise with a new trilogy. It’s almost a certainty that he’ll ignore all Terminator films made after Terminator 2, though.

“I think it’s fairly widely known that I don’t have a lot of respect for the films that were made later,” Cameron told Australian news site news.com.au. “I was supportive at the time in each case for Arnold’s sake because he is a close friend. He has been a mate of mine since 33 years ago so I was always supportive and never too negative. But they didn’t work for me for various reasons.”

This casting suggests that this new Terminator will be a direct sequel to Terminator 2, possibly resolving the fate of Hamilton’s character while also introducing a new younger cast around which the trilogy will be centered. A similar strategy was used for the latest Star Wars trilogy, which saw the return of original stars Carrie Fisher, Mark Hamill, and Harrison Ford to their iconic roles, but focused on a cast of new protagonists.

Another wrinkle to the casting is that Hamilton and Cameron were married to each other briefly in the late 1990s, resulting in a $50 million divorce settlement. Hopefully the 20 year time gap has smoothed over any hard feelings.