Khaby Lame is a Senegalese TikToker with an estimated net worth of $12 million in 2022. The Italian-based content creator lost his factory job during the pandemic and is now a highly-paid social media superstar. He set up a TikTok account around March 2020 when Italy first went into lockdown just to pass the time.

He has over 153 million followers on TikTok and 2.5 billion likes! In June 2022, Lame became the most followed person on TikTok, passing out Charli D’Amelio who he was stuck behind for two years. On Instagram his growth is also insane, he’s doubled his followers since the start of the year and has 80 million fans on the platform.

It’s crazy to see how he’s built such a huge following without having to speak! Khaby is most well-known for his silent videos, sarcastically mocking people who over complicate simple tasks. He has really mastered the deadpan sense of humor, a difficult feat to accomplish!

How Much Money Does he Make?

Given his rapid rise to internet fame, it has opened up a whole host of ways to earn money. Brands are eager to partner with popular influencers that have strong fan engagement. According to his manager Alessandro Riggio, Khaby currently earns up to $750,000 per sponsored TikTok video and makes an estimated $1 million per month.

According to Complex, he was paid $450,000 on a brand deal with Hugo Boss which involved him walking for Milan Fashion and posting clips online. The majority of his income comes from brand sponsorships and he also runs an online store selling t-shirts and hoodies. At one point his store sold overpriced juicers and magic candles but it appears those products are no longer available.

Due to the number of companies interested in working with him, Khaby hired a manager (Riggio Alessandro) to help make his life easier. Alessandro is doing a great job and isn’t making him too commercial. The reason people gravitate towards Lame is because he has an everyman quality.

Born in Senegal on 9th March 2000, he is 22 years old. Despite becoming a millionaire in 2020, Lame isn’t from a wealthy background and was raised in public housing in Chivasso (where he currently resides). Before the pandemic he worked as a CNC machine operator, his days of manual labor are surely over! 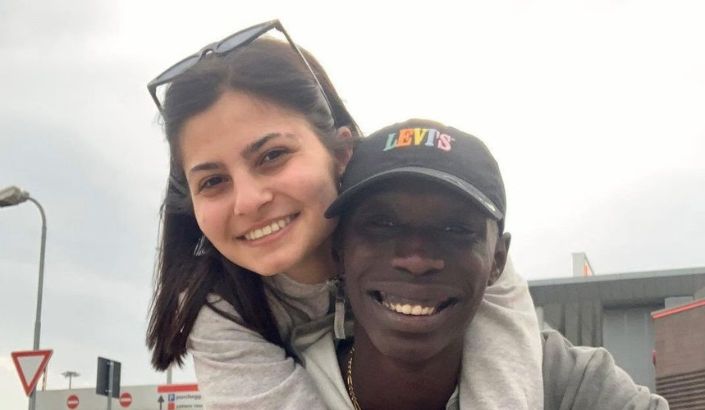 Lame is engaged to Zaira Nucci and publicly shared the news on Instagram in October 2020. Zaira is a successful influencer in her own right and has around 142,000 followers on Instagram. Nucci is studying interior design at IED Milano. Despite not speaking in videos, Lame is bilingual and speaks fluent English and Italian! He only recently became an Italian citizen and is hoping to get into acting in the future.