‘The Karate Kid’ Is Getting A Sequel Series On YouTube Red 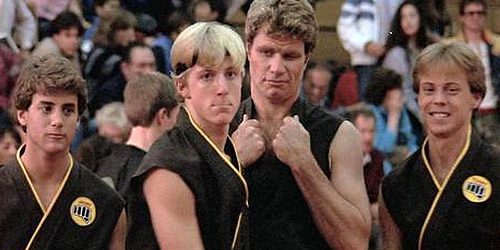 Don’t get The Karate Kid a body bag just yet. Ralph Macchio and William Zabka are both returning to the world of the original Karate Kid in a new series coming to YouTube Red.

You probably don’t need to be told about The Karate Kid, because it’s a true ’80s classic (even if the movie actually isn’t very good). Young Daniel LaRusso is trained by Mr. Miyagi in karate so that he can take on the evil Johnny Lawrence from the Cobra Kai dojo. Naturally, Daniel-san wins, because it’s an ’80s sports movie.

That’s all relevant to the plot of this new show, which is called Cobra Kai. Zabka is back as Johnny, who decides to reopen Cobra Kai in an attempt for redemption. Meanwhile, Macchio’s Daniel is dealing with life without his mentor Miyagi. Miyagi was, of course, played by Pat Morita, who died in 2005.

The series has already been ordered for 10 episodes, and they will begin airing in 2018. Cobra Kai is being written and produced by Josh Heald of Hot Tub Time Machine and John Hurwitz and Hayden Schlossberg of the Harold & Kumar films. That makes this seem like this could be more of a comedic take. As long as Daniel and Johnny end up squaring off, everybody will go home happy.