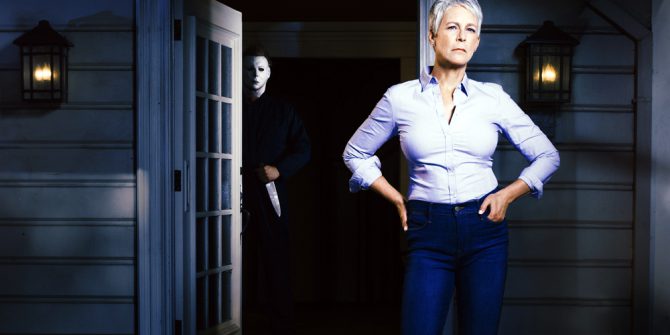 Laurie Strode will once again face “the Shape,” Michael Myers, one last time. Jamie Lee Curtis, who starred in the original Halloween (1978) and Halloween II (1981), announced on Twitter that she will be returning to the iconic role in a new unnamed Halloween sequel set for release on October 19, 2018.

“Same porch. Same clothes. Same issues. 40 years later. Headed back to Haddonfield one last time for Halloween. Release date 10/19/18,” she posted. The statement was accompanied by a photo of Curtis standing on the front porch of the famous Halloween house as a menacing knife-wielding Michael Myers looked on from the shadows.

Jamie Lee Curtis’s career began with the horror film Halloween, one of the earliest slasher films. In that film and its sequel, her character of Laurie Strode survived brutal attacks by the killer Michael Myers — a masked bogeyman who murdered his own sister when he was a child. Halloween II revealed that Laurie was also Michael’s sister.

Needless to say, this newest Halloween will also have no connection to the Rob Zombie-directed reboot movies.

Curtis last returned to her horror roots in the slasher-comedy series Scream Queens, which lasted for two seasons on FOX before being canceled earlier this year. (I highly recommend watching the hilarious first season and then pretend the second doesn’t exist.) She is known as the original “scream queen” for her role in Halloween, a film that practically invented the slasher genre and inspired copycats like Friday the 13th and A Nightmare on Elm Street.