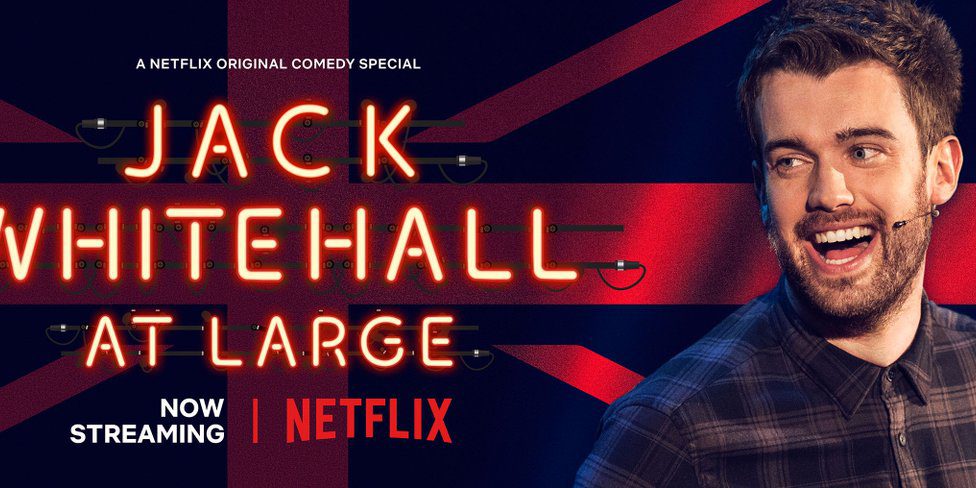 “Show business baby. Show business. Wow! How amazing is this?” asks Whitehall at the start of the special, dressed in jeans and a plaid shirt. “Here we are at the recording of my first ever Netflix special.”

“I don’t know why I’m talking into this microphone. I’m on a headset,” he said. “I doubt that’s even on. I doubt that’s even… I mean, not even plugged in. Literally just a prop.” The crowd roars with laughter.

During his one-hour stand-up set, the comedian shared hilarious stories about drinking, drugs, and his rivalry with Robert Pattinson.

Whitehall then goes into telling a funny story about how his family is full of heavy drinkers. “My dad, he drinks a lot. This is how big of a drinker my dad really is. I took my dad to a McDonald’s the other day, for the first time ever. He asked to see a wine list.” The comedian jokes about how McDonald’s is very confusing. “They’ve got salads, carrot batons… I swear, we are a year away from McQuinoa.”

Whitehall continues to get the crowd to burst into laughter. “This is why you cannot smoke a spliff on the street in the year 2017. As I put this spliff to my lips, I looked up, and the bloody Google Maps car with the 360 camera was driving past.” Whitehall shows an image of him smoking a spliff on the street.

The comedian gives a brief background of his acting career. “When I was at school I was a big fan of drama,” he said. “I know, shock, horror. Not the only fan of drama in school. The other guy that was really into drama at my school was a chap called Robert Pattinson. There he is. Young R Patz, star of theTwilight films. And, every time there was a play at my school Robert Pattinson would get cast in the lead role.”

If you’ve never heard of Jack Whitehall, you’ll find his British humor and material on drinking, drugs, and his rivalry with Robert Pattinson pretty funny. Whitehall recently finished his 2017 live tour so there aren’t any new tour dates booked. Until his next tour, you can watch Jack Whitehall: At Large on Netflix.