How to Achieve the Ideal Gaming Setup! 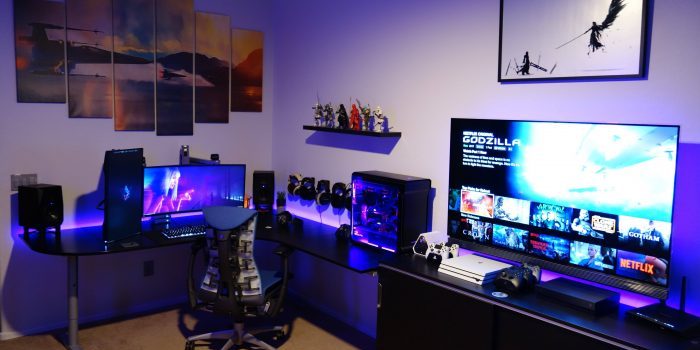 What is the ideal gaming setup and is there such a thing? For many people who aren’t into gaming, no there is no such thing. They just want something casual that they can turn on and play whenever they wish. Quite obviously they don’t take gaming very seriously and thus they don’t possess the mindset of someone that does. A perfect gaming setup isn’t just so you can have the latest equipment and feel as if you are moving with the times, it’s about performance and being able to play the games you love at the optimal graphics settings and frames per second. The secret reason why many gamers want to have their perfect gaming setup is because they want to feel comfortable to the point that their system matches them like a glove. It’s a psychological desire as much as it is physical. So now we head into the eternal battle, PC vs console. There are different kinds of setups for both, but by far PC is the more expensive but also the more complex and intricate. Console gaming has moved forward a long way than where it was a decade ago but PC has continued to skyrocket.

it’s 2018 and if you plan on building a modern PC setup for gaming you have to incorporate something that is taking off and will be the future. VR gaming is here to stay and will be advancing quickly into gaming of all kinds. Right now you can wear VR sets that allow you to play racing games as the driver sat behind the wheel. Others games such as VR Chat are designed to have multiple people interacting together all at once in different worlds. Quite literally it’s social media that has come to life and now you can whoever you want to be in this game. Other games such as first person shooters are also taking off because it allows gamers to be placed into the role of a combatant on the ground.

The best headsets on the market right now are the HTC Vive Pro and the Oculus Rift. Cheaper products such as the Samsung New Gear and Oculus Go have also ventured onto the shelves. Expect to pay anything from $1,100 to $750 for a top of the line VR headset. However the cheaper variants are around $500 and under.

The GTX GPU series has finally come to an end. For many people it’s long overdue as the newer games that are being released really need new graphics cards to bring the best out of them. However the culture and business strategy of new graphics cards is that the most powerful and expensive cards come out first. This is because the companies want to stretch their capabilities to the maximum and then work out the kinks to improve the entire card line. Then when the formula is down and lots of consumer testing has occurred, the lesser cards will be designed and released. Right now the RTX 2080 is the top card in the world for PC gamers. However the best version of this model is going to set you back around $1,250. Yes, that’s just for the GPU itself and in order to run a computer that can handle the power, you’ll need much more. If you would like to create your own modern PC then you’ll need plenty of funds. A modern PC that is the ultimate setup will cost you between $5,000 and $10,000. Judging that a modern motherboard, fan-cooled case, RAM, CPU and power unit is going to near you around the $7,000 mark you’ll need to consider just how serious are you about creating your ideal gaming setup.

It was thought that gaming chairs were a gimmick that didn’t really matter and you could in fact use any old office chair to game. However as both console and PC gamers have found out, gaming chairs are designed for their needs specifically. They have swivelling armrests for when you’re moving around arm positions for the best posture to play racing games as opposed to shooters. There are also headrests that are adjustable as well as lumbar spine pillows. The pillows too are also adjustable as well as both being removable.

The top gaming chair spot keeps changing as newer models are always being released and new features like the full tilt are being introduced. Memory foam is also being used rather than polyester filling, making seating much more flexible as well as stronger than ever.

For the first time in the genre, exploration racing games have finally taken off in the mass market. Before the early Need for Speed series came out with Most Wanted which was one of the best exploration racing games made in the early 2000s. However now with Forza 4, the need for gamers to feel their cars through their hands and feet is bigger than ever. That’s why if you’re serious about F1 racing, Forza, Gran Turismo and more you should consider buying a Logitech 29 Racing Wheel. It uses a powerful dual-motor force feedback for giving the gamer great touch sensitivity and ability to feel what their virtual car is doing. Although it’s best used for PC gaming, it’s able to be used on both the PS3 and PS4.