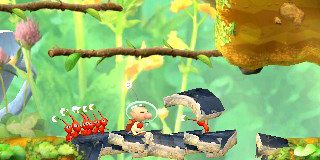 Nintendo‘s adorable Pikmin have garnered quite the cult following over the years, but the Lemming-like creatures have never enjoyed the same sort of mainstream spotlight as Mario or Link. Their popularity could see a spike, however, with Hey! Pikmin, an engaging, accessible spin-off entry exclusive to the 2DS/3DS family of handheld platforms.

A fresh take–and 2D perspective–on the franchise’s familiar formula, Hey! Pikmin trades some of the more strict strategy elements of its console entries for a side-scroling puzzle-platformer that’s a great fit for the portable device. Once again, players assume the role of Captain Olimar, who, this time out, has crashed his ship on a mysterious planet teeming with–you guessed it!–cute, multi-colored Pikmin. Repairing the good Captain’s craft requires collecting Sparklium, a resource that can be simple to find, but difficult to reach.

Of course, this is where Olimar’s small army of plant-like pals come in. Leveraging the little guys specific, color-coded skills, players are able to toss them around to overcome obstacles and achieve various objectives. Blue Pikmin love the water, for example, while the red one’s aren’t afraid of fire. There are also Pikmin that can conduct electricity, crush rocks, and construct objects. Learning the various Pikmin types, and making them work together to achieve larger goals, is half the fun. Aside from puttering around with a jetpack, Olimar’s abilities are pretty limited, so strategically using his willing helpers is key to success.

Controlling both the protagonist and his Pikmin is a highlight, as Hey! Pikmin doesn’t attempt to shoehorn existing console mechanics onto a portable system, but rather makes clever use of the mobile platform’s unique strengths. The game doesn’t reduce the 2DS’/3DS’ lower screen to a mere menu interface, for example, but instead allows it to host the bottom half of the action. With the full gameplay experience unfolding across the dual screens, players simultaneously maneuver Olimar with the C-stick, while literally grabbing and tossing Pikmin with the stylus to do his bidding. The intuitive lay-out definitely takes some time to get used to, but it ultimately makes for a more enjoyable, immersive experience.

While the core gameplay–further complemented by a vibrant, charming visual presentation and delightful audio–is a blast, Hey! Pikmin‘s puzzles and boss battles lack the challenge longtime fans might expect from the series. The game will occasionally tax your brain and reflexes, but never to the degree of its console counterparts. Because of the lacking challenge, some players might find themselves breezing through levels and, therefore, sadly missing the many hidden stages and surprises awaiting more thorough explorers.

Hey! Pikmin is a different, less challenging game than the series’ previous entries, but it really doesn’t suffer because of these tweaks. Some seasoned fans of the franchise will likely scoff at it as a watered down version of Pikmin game’s past.I’d argue, however, it’s entirely its own thing, a fresh, more accessible spin on a niche franchise that might be embraced by a brand new audience, while allowing existing Pikmin wranglers to play in a whole new way until the next core entry arrives on console.

If you’re craving a Gamecube-era Pikmin entry, this latest may leave you wanting more strategic depth and brain-bending challenge. Those looking for a personality-packed, puzzle-solving, portable-friendly romp, however, should enjoy this fun, accessible spin-off of a franchise that deserves more attention.