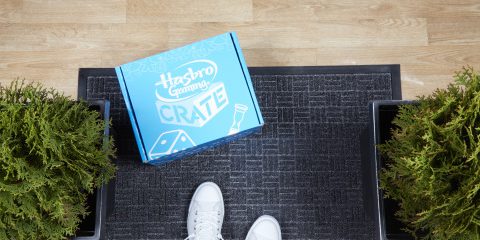 With subscription boxes for everything from dog treats to makeup, it would only make sense for there to be a board game subscription box. Announced on Monday, Hasbro revealed its first subscription service, the Hasbro Gaming Crate.

According to a press release, the Hasbro Gaming Crate is “among the first for the gaming industry, this unique program offers an exclusive collection of games curated by Hasbro Gaming experts, new to the Hasbro Gaming portfolio, delivered straight to the subscriber’s door every three months.

Both boxes will cost $49.99 and will be delivered every three months. The boxes will include three games along with a “zany theme” each time. “Hasbro Gaming Crate caters to multiple types of gamers with two themed crates, each with three games, priced at $49.99 plus shipping per crate, charged automatically when the crate ships.”

The first Family Crate will include the game Mask of the Pharaoh, a “collaborative, virtual-reality board game in which players download the Mask of the Pharaoh app.” While using the included VR mask, players will have to work with the other players to describe the pyramid and build a path to victory.

“Delivered right to subscribers’ doorsteps, the Hasbro Gaming Crate subscription service makes it easy and convenient for families and fans to try new games,” said Jonathan Berkowitz, senior vice president of marketing for Hasbro Gaming. “Whether you’re planning a game night at home with your kids, or out with a group of friends, we’re confident the games our experts have selected for each crate will provide plenty of fun, laughter and friendly competition.”