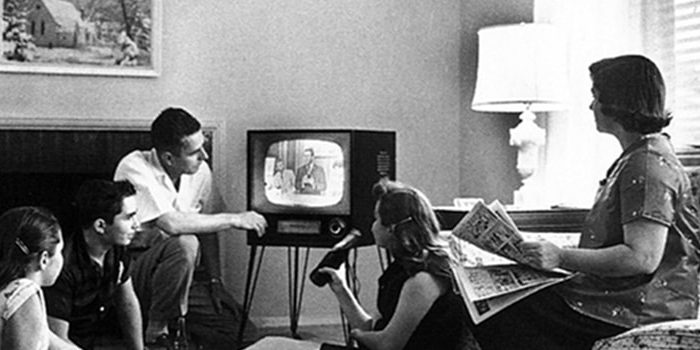 The watercooler conversation in the office has moved on a lot in the past decade – and it’s always a good representation of how things are looking in the world. Around 15 years ago, 52.5 million Americans tuned in to see if Ross and Rachel would make it in the last episode of Friends. But now, nobody could imagine traditional television bringing in as many viewers, especially with streaming services absorbing a lot of cable TV’s audiences. Traditional television’s viewership has dwindled in recent years in favor of a different way of consuming our entertainment. Netflix’s revenue has increased tenfold since 2005 and has become the word du jour of quality content. Other digital platforms such as Amazon’s video unit, Now TV and reality mix Hayu are also snatching viewers from the tube. So, the question stands – is TV dead?

Modern TV Viewing By the Numbers

Experts predict that between 2018 and 2021 we’ll see a 64 per cent increase in ‘cord-cutters’ – those who have fallen out of love with cable TV. Live sports were once thought to be the glue that held a lot of cable TV packages together but figures show that the PyeongChang Winter Olympics was watched by 8.03 million, compared to the 13.27 that tuned in to Vancouver’s hosting in 2010. And the entire two weeks of the 2018 Winter Olympics was the least watched programming, which shows in itself where TV stands. When analyzing the average person’s time spent watching video per day, 2015 saw four hours and 10 minutes on TV with just one hour on digital devices, compared to three hours forty-seven minutes and one hour twenty-six minutes of 2018. Digital viewing is slowly eating into the viewership of standard television.

Getting with the Program – Literally

61% of young adults watch streaming platforms exclusively – a number which will increase with each generation. One of the reasons for the gulf between viewership is that companies aren’t listening to their consumers, especially the younger ones. We saw this first with Kodak and their refusal to move from print to digital photography, which cost them their prime business. Then, Blockbuster collapsed due to their obliviousness to the changing way we consume content. The decision of Blockbuster not to offer a digital service was one of the worst corporate blunders in history, according to Betway. Especially so considering that Netflix was in the same position and diversified its programming with the streaming platform. TV needs to take some stark lessons from previous corporate collapses to ensure it doesn’t do the same. It’s time to get with the program.

Netflix users watch more than two billion hours of content per month – and every single program or movie is carefully recorded. The data collection and analysis for Netflix helps them find what viewers want to watch and it helps them knock hit after hit out of the park – from fiction to documentaries. From first day binges of Orange is the New Black and Stranger Things showing what kind of series we want to watch, to the company’s current run on high-brow sci-fi movies demonstrating our love for all things weird. TV is harder to monitor and Nielsen ratings have been affected by on demand and recording services which don’t provide as accurate a picture. We’ve changed from watching episodes weekly on a serial basis to watching all in one go as a binge.

What Could TV Do?

One of the biggest barriers of enjoyment for TV is the adverts. While necessary to maintain the costs of running the network, commercials are skipped over by nearly 90% of viewers. If TV were to move forward and compete with digital streaming platforms, it would need to deal with how it finances itself and how advertising on TV works. Paid-for services often omit adverts but a lot of standard TV programming isn’t necessarily something people feel they should pay for. In the UK, the BBC network is funded through the TV license and only advertises its own shows. The flagship channel, BBC One, is often the most watched in the prime viewing slots, which shows that adverts have a huge part in TV’s current offering holding it back.

What Does the Future Hold?

Qualitatively, television provides a different kind of escapism than digital services. TV can be stuck on in the background or to pass a short time and you can watch game shows, the news, or shows you’re not committed to searching for. Digital platforms are forcing us to pay more attention to what we watch. This is both beneficial in that we don’t have to watch what we don’t want to – but it also means we need an idea of what we want to watch beforehand. However, this could all be about to change as Netflix have announced that they will be trialing advertisements between episodes of shows on their platform. With the streaming service slipping into the patterns that cost TV so many viewers, are their days numbered too?

Television has been around for as long as most people can remember and has provided us with a companion, a reason to laugh, to cry, a conversation topic, a way to release stress, and a way to learn about our surroundings and far-flung places and cultures. HBO’s Game of Thrones is a shining example of a more traditional way of watching content – and is one of the most watched and talked about shows ever. Digital platforms may be on top currently but it’s unlikely that TV will ever really go properly out of fashion. In the same way that vinyl boomed back onto the scene, television is just waiting in the wings to make its comeback and become another spoke in the revolution.