Good Vs Evil: A Played Out Theme? 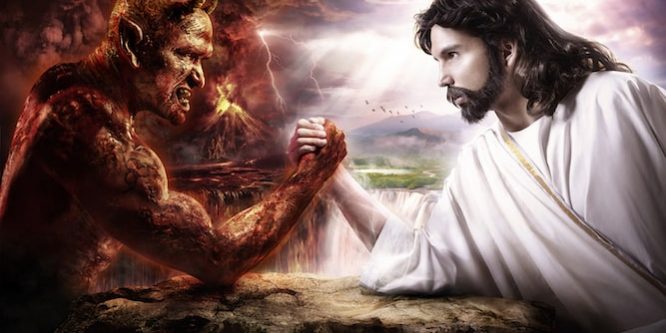 In every good story there is always a reason for it to exist. There has to be a lesson that can be learned or interpreted into some kind of meaning. Hence the most prolific kind of story is the battle of good versus evil. It’s featured in many ways that have been passed down from generation to generation but mainly, it comes in the form of books and written tales. The modern equivalent art forms are movies, tv shows, images and of course video games. How better to tell this story in it’s countless ways than through an interactive artform? The player can make decisions in real-time that affect the gameplay and the storyline narrative. But what kind of styles have been played out and what could be looked at in the future by video game studios?

The act of revenge is seen throughout many video game storylines. And why shouldn’t it be, it’s quite satisfying to hunt down someone who you trusted but then backstabbed you. Well, in the GTA series this has been done 5 times in a row. In GTA III we saw Claude Speed hunt down Catalina who was part of the bank robbery gang he was in. In the next installment of GTA Vice City Tommy Vercetti hunts down Sonny who he once worked for but again, deceived and betrayed him. In GTA San Andreas, Carl Johnson hunts down his brothers Ryder and Big Smoke after they betray him for power and influence. In GTA 4 Niko Bellic hunts down his once friend Pegorino because he killed his girlfriend. And finally in GTA 5 Michael Townley hunts down either Trevor or Lester as they betray him over a heist they each took part in. As you can see, this theme is repeated over and over. Maybe time for something new from one of the biggest franchises of all time? Maybe an exploration into being the evil person and trying to justify it?

In the movie Dogma we see an epic battle but sometimes funny story of good versus evil in a religious sense. Angels and demons have been fighting each other for a long time in the Bible, and often times human beings get caught in the middle of it. This presents the mortals conundrums, sometimes tasks to complete to aid the angels but there are also temptations they must avoid. A video game centered around this theme has been done before in the Devil May Cry series but it hasn’t been done in the way of a board game which is more tactical and offers more control. Many people wonder what do angels look like? Well Gabriel the messenger is well-known to be on the side of god. A board game by the name of Deliverance is something that may excite those wanting step into this kind of holy adventure. There are many characters and abilities that you can utilize to fight for your cause. You’ll also gain a better understanding of this biblical battle in the process of playing.
Good versus evil is the most recognized theme in any kind of art. It is this way because, it happens everyday. Maybe the GTA series could explore different options and break away from the betrayal angle. On the other hand a battle taken to biblical proportions could get people excited for something new.