It’s one of the ultimate physique memes on the Internet, so much so that people have questioned the existence of the person who’s behind it.

Who are we talking about? Why, Ernest Khalimov, of course. He’s the owner and supposed originator of the GigaChad meme, which is listed on Instagram as berlin.1969, and the account has about 1 million followers.

Fact and fiction tend to get mixed up fairly quickly in any discussion about Khalimov, however, so it’s important to keep that in mind as you assess the validity of what you’re about to read.

As best anyone can tell, Khalimov is 53, and he lists himself as a Russian fitness trainer and model. The earliest images of him first surfaced in 2017, but a Russian photographer named Krista Sudmalis has traced his online origins back to 2015.

Sudmalis appears to have an intriguing ulterior motive of her own. She “discovered” Khalimov as part of a photography project in which she accessed pictures of male bodybuilders and female models, with the project dubbed Sleek ’n Tears.

That made Khalimov a minor celebrity, to the point where he’s now known as the embodiment of the so-called “Chad” meme, which represents the ultimate in masculine personality and “perfect” appearance.

That in turn led to the GigaChad moniker, which has been characterized by an ongoing onslaught of memes that mock the Chad meme. There’s been a lot of speculation about whether Khalimov is real, or just a product of advanced photoshopping using CGI as the vehicle.

The mythical aspects of GigaChad have been fueled by the fact that no one’s been able to find any videos of Khalimov, not to mention that fact that he’s not active on the Internet and has expressed little or no interest in brand deals.

The rumors continue to have a life of their own, though, and if Khalimov is even half as active as the rumor mill implies he’s undoubtedly having a very entertaining life.

The latest round of rumors have him dying in a car accident, but shockingly, these turned out to be untrue. A good death hoax is a solid way to stay in the public eye online, though, even if Khalimov continues to maintain that he “does not cooperate with anyone” and doesn’t really have what he describes as a “sociable” person.

The fact that he doesn’t even have a Wikipedia page has fueled even more speculation, and the rumors continue to make their rounds, with very little information to actually support them or verify that Khalimov actually exists.

The closest anyone has been able to get to identifying the Russian model’s actual origins has been to “trace” his birth date to March 1st, 1969 in Moscow. 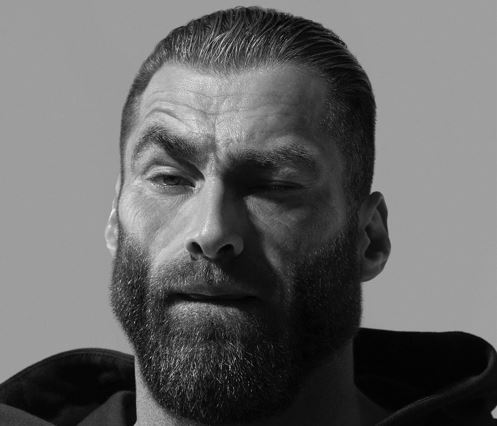 There’s no birth certificate or any official documents to support any of this. There’s no valid data about his height or weight, either, although there are rumors that he may be from Turkey or one of the surrounding countries or ethnic regions. So does Ernest Khalimov really exist? No, most likely he isn’t a real person and was created using advanced photoshop.