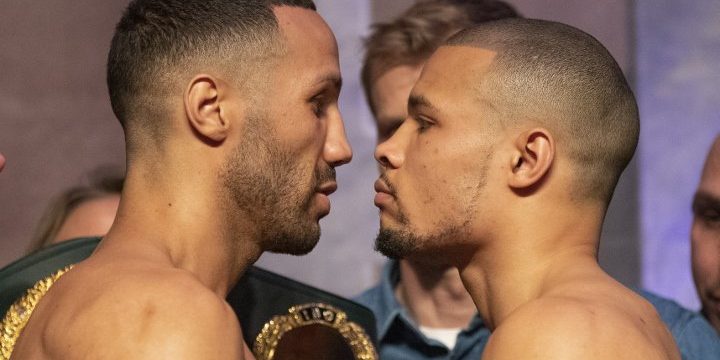 There could be fireworks when Chris Eubank Junior takes on James DeGale this Saturday. Primarily this is a fascinating domestic grudge match but there is also a belt on the line, the little-valued IBO World Super Middleweight Title. Both fighters have points to prove and could progress meaningfully with a win.

Eubank 27-2 (21) only fought twice last year, the Brighton man won a tick-over fight in Jeddah against JJ McDonagh but his most notable appearance was his pay-per-view drubbing at the hands of George Groves. It has to be said though that there is no shame in being beaten by George Groves. The Londoner showed real world level ability over the course of his career before retiring at the end of last month.

Despite the loss Eubank showed toughness and has consistently shown his ability to bring intensity to any bout. His impressive knockout ratio also stands as testament to that intensity.

Conversely James DeGale 25-2-1 (15) lacked intensity and drive in his shock defeat to Caleb Truax in December 2017. He’s avenged the defeat since with a points win over the American but the original loss took a lot of the sheen from DeGale’s recent form.

Since then he’s stopped Fidel Monterrosa Munoz but the fact that he became the 16th man to do so rather undermines that stoppage in terms of form. The performance may at least suggest that DeGale’s infamous shoulder problems are subsiding.

Chris Eubank Junior’s cousin, Harlem Eubank, who is an undefeated pro in his own right, believes that intensity and work rate could be the key to a Eubank win at the weekend.

“I think DeGale will be looking for breaks and Chris isn’t going to allow any of that with his intensity. I think he’ll stay on him, sit on the inside and throw a lot of volume late on and I think he could stop James late on.

“I think because Chris is that bit fresher I think he will have too much for James late on. I think James might win a few of the first rounds. I think he might be ahead on points early but I think he’s going to fade and Chris’s intensity is going to be too much for him.”

Despite predicting a late stoppage win for his cousin, Eubank also believes that DeGale will present more of a threat than recent form suggests. “I think he wasn’t as prepared for Truax because he wasn’t as much of a name at that point” he said. “He kind of took it lightly and got that shock in the ring I think whereas with Chris he knows what’s coming forward at him. I think he’s going to be more ready but I think Chris is going to throw too much volume late on in the fight.”