Dark Season 2: When Will it be Released on Netflix? 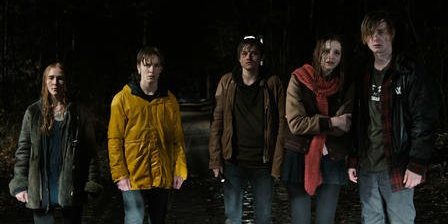 The German science fiction series has attracted a cult following since debuting on Netflix last December. Luckily for fans, Netflix decided to renew the series! Production will begin on June 25th and is expected to be released in mid 2019 with eight episodes.

Dark received largely positive reviews from critics and drew strong comparisons to Stranger Things. Both shows follow a similar plot, a young kid disappears in a small town and no one knows what happened but it’s clear something isn’t right. Appropriately named Dark, the Sci-fi thriller is much more spookier than Stranger Things but just as easy to binge watch.

What to Expect from Season 2

Season two will probably be equally gruesome and ambiguous as the first. Images were released to the media that show Jonas Kahnwald, strolling through what looks like the post-apocalyptic version of Winden in 2052. Here he meets a strange group of people, but it is unclear who they actually are. A teenage girl says to Jonas “welcome to the future.”

Co-creator Jantje Friese says the second season won’t just be just following older versions of the same characters. New characters will be introduced and some old characters might be killed off. It’s unlikely any of the main figures such as Jonas, Ulrich, Claudia, Noah and Helge will less prominent. Baran bo Odar stated that Jonas will remain a key character involved in important moments throughout the upcoming series. The story line will also shift some spotlight to other individuals, so viewers will learn more about characters who played a small role in season one.

Dark is set in the fictional town of Winden and closely follows the lifes of four families affected by the mysterious disappearance of two children. Over the span of ten hours, the show depicts how a small town reacts to a number of unnerving events that tie back all the way to 1986. The series opens with Jonas’ father hanging himself, he leaves behind a letter with a note attached saying not to open it until the 4th of November. On that date, a young red hair boy named Erik Obendorf has been missing for two weeks and officer Ulrich Nielsen is given the case. The case has significant meaning to Ulrich because his teenage brother vanished 33 years ago without any trace.

On November 4th, a group of kids including Ulrich’s son Mikkel went into the forest to explore the cave. The group run away after hearing a loud noise and Mikkel disappears. The following day, the dead body of a young boy is discovered in the forest. The boys eyes are severely burnt, and his clothing/walkman suggests he’s from a different time. Next we see Mikkel appear from the cave and walks into town to find his parents. He soon discovers he has time traveled back to 1986!

Darks plot revolves around time travel between three periods: 1953, 1986 and 2019. Not surprisingly the story line gets increasingly complicated the longer you watch the show.