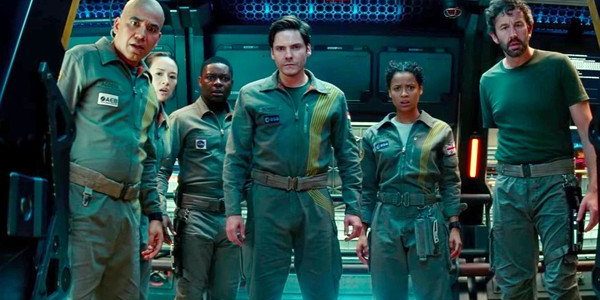 Part of the Cloverfield movies’ unique marketing campaign is that they almost don’t have one. They’re dropped on the world suddenly, with little advance notice, making the sudden appearance of one mimic the unforeseen events that terrorize its characters. True to form, The Cloverfield Paradox — the third in the loosely connected series — was released as a surprise Netflix exclusive right after it was announced during Sunday’s big game.

Filmed under the code name God Particle, The Cloverfield Paradox was headed for a theatrical release until Paramount made the Netflix deal because it reportedly wasn’t satisfied with the film’s big-screen prospects. Normally, such a move would scream that the film in question isn’t just a disaster movie — it’s a disaster. But in reality, The Cloverfield Paradox may not be a great film, but it’s not that bad, either.

Set in a near-future, an imminent energy crisis is bringing countries to the brink of war. The only hope to avoid Armageddon and bring Earth the much-needed energy it needs is for an international team of scientists and astronauts aboard the space station Cloverfield to successfully generate power using an experimental particle accelerator. Naturally, things go haywire, and — like any typical horror thriller set aboard a space station — the body count goes up as the crew gets picked off one by one by… science?

It seems that the crew, including communications specialist Ava Hamilton (the engaging Gugu Mbatha-Raw) has inadvertently ripped the fabric of time and space, causing two alternate dimensions to crash into one another. This results in general weirdness around the ship — Irish technician Mundy (Chris O’Dowd) painlessly loses an arm only to find it crawling around on its own later and Russian scientist Volkov (Aksel Hennie) gets a bad case of the space worms. Most disturbing of all, an unknown woman (Elizabeth Debicki) is gruesomely stuck between the walls, screaming, revealing that she knows the crew even if they don’t know her.

Unfortunately, any suspense that might’ve been derived from their predicament — what’s happening and how it came to be — is undercut by the fact that a cable news interview with a crackpot conspiracy theorist early in the film lays it all out for the audience. And while The Cloverfield Paradox isn’t a direct sequel to the original Cloverfield or 10 Cloverfield Lane, the spiel also explains how the events in those movies came to be, finally providing the thread needed to connect all three films. It’s what Cloverfield fans have been yearning to know, but front-loading that information up front is akin to announcing who the killer is in the first 10 minutes of Murder on the Orient Express.

The result is that, despite a stellar cast –including Roger Davies and Daniel Bruhl — and feature-worthy special effects, The Cloverfield Paradox is reduced to being a mediocre thriller set aboard a derelict space station or ship, complete with paranoid crew. Except for one or two creative death sequences, we’re treated to the usual scenes of death by exploding gas canister and characters being sucked out into open space. Anyone who saw last year’s phenomenally awful Geostorm will know what I’m talking about — though, to be fair, The Cloverfield Paradox at least manages to be far more watchable.

The Cloverfield Paradox plays out like an extended-length episode of Black Mirror, including a quick morality lesson on the ethics of tampering with alternate dimensions. It’s worth watching, and is a good entry point to the Cloverfield franchise (you don’t need to watch them in order), but it probably won’t win over anyone who didn’t like either of the first two movies.