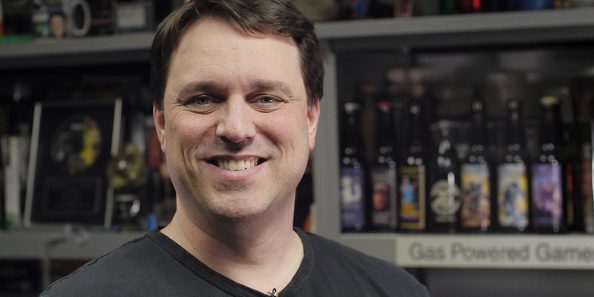 Chris Taylor, the man behind such PC classics as Total Annihilation and Dungeon Siege, has reached that stage in his career where he’s often referred to as “veteran” or even “legend.” With good reason, too — he’s celebrating 30 years of designing games, which seems surprising given how youthful he looks. (I’ve known him professionally for about 18 years and the man has not aged.)

After a long career making games for the “big boys,” Chris left his last gig as General Manager at Wargaming to start his own indie game studio and pursue his love of pottery. At today’s Casual Connect game conference in Seattle, he shared 10 tips for better games (and maybe a better life) that he’s learned over three decades of game development.

Chris says he wished he understood the emotional potential of games better when he was first starting out. Developers tend to get caught up on the technical aspects of a game — graphics, audio, etc. — without thinking about how a game makes a player feel. He now creates a Game Experience Document for every game he makes to plan the player’s emotional journey.

Describing it as the bedrock of entertainment, Chris says that surprise is a key element to keeping a player’s interest. Don’t give a player what they’re expecting (that’s boring), delight them with the unexpected.

Historically, games tend to punish players for poor performance. (Think about how you feel when you get a “Game Over!” message after dying too many times. It’s a downer, right?) Chris suggests that, instead of punishment, a better solution is to reward the player when they do something “more right.”

This may sound intuitive, but Chris takes it a step further — he says he would rather work with someone who has integrity and passion over someone who works harder or later. Noting that he’s worked with a lot of jerks over the years, Chris advises that the personal drain and frustration from working with toxic personalities isn’t worth any short-term benefit.

Chris says that one of the most important discoveries in the world of gaming is that obstacles (aka friction) can keep players from getting into a game. For example, how many times have you tried signing up for an online game only to get a message that your chosen username is already taken? It’s almost like the game doesn’t want you to play it! The more hurdles and hoops you have to jump through, the less likely you’re going to start playing.

In short, give people what they want. As an example, Chris says that data-driven game engines allow you to build thriving mod communities that keep a game alive long after its launch date. He notes that it’s been almost 20 years since the release of Total Annihilation and players are still creating mods for it.

Persistence keeps players playing because their investment grows over time. Therefore, everything a player does should earn rewards or achievements to feed their persistence in finishing a match, level, campaign, or story. Chris believes that his early games might’ve been 30 percent more successful if he had understood this concept better when starting out.

Are you being bold with your game design or are you being safe? Developers who play it safe aren’t reaching their full potential and, therefore, aren’t delivering the best game possible to players.

Do you dream that you were rich or successful? Chris opines that if you haven’t flipped the script and made that dream a goal, then you’ve already failed. Forcing yourself to work towards a goal, and not just passively wish for an outcome, is a valuable life lesson for game developers and non-developers alike.

Don’t neglect your health and family

Chris’s final bit of advice to game developers is that your games will ultimately be better if you’re healthy and happy. Screw this up and your creativity and quality of output will undoubtedly suffer. You don’t even have to dedicate a lot of time to keeping yourself fit — Chris says he does one minute of physical exercise a day. (I don’t believe it, though. The guy is jacked!)