Cher Gets Animated (And Alien) In Her New Music Video 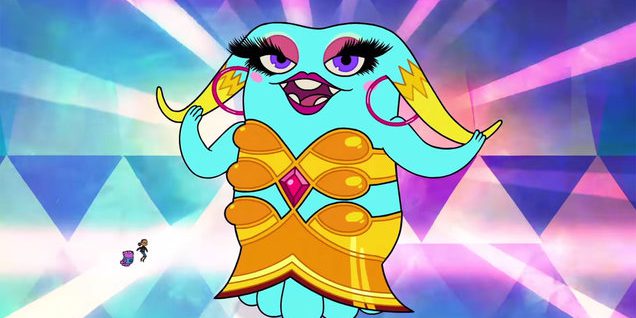 Cher has made some notable music videos before. Namely, in the video for “If I Could Turn Back Time” she wore a rather revealing outfit and performed on a naval ship, straddling big guns and so forth. It has become known as one of the kitschier music videos out there. Well, many years later, Cher has made another odd music video, but this time we don’t know what she was wearing when she made it, because she’s animated…and also an alien.

The song, which is called “Ooga Boo,” comes from Netflix’s Home: Adventures with Tip & Oh. The show is a spinoff of the animated movie Home, which starred an alien on Earth. So now, it may make more sense why Cher is an animated alien in this video. Cher appears as a weird aqua blue alien wearing the sort of lavish, extravagant you might imagine the actual Cher wearing in human form. The alien Cher travels all about the universe with the titular character from the Netflix show.

Sure, you might be wondering why Cher has a music video tied into a Netflix show based on a kid’s movie. Kids don’t really care about Cher. You might also think that “Ooga Boo” is a silly name for a song. Still, this is an…interesting development for Cher. At least she’s still innovating.