6 Celebrities Who Started Off As Buskers! 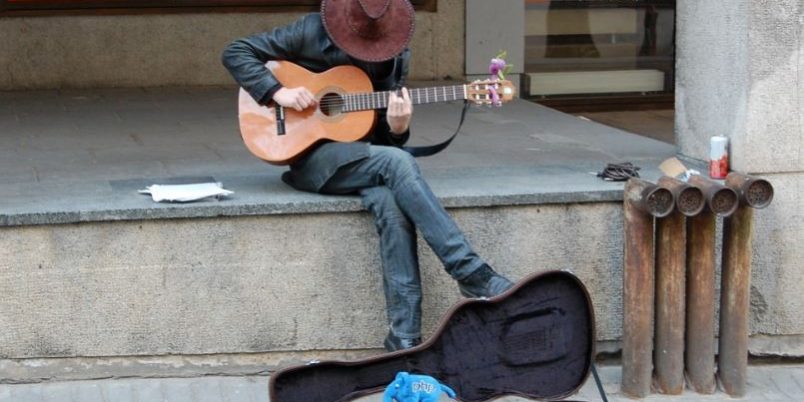 As every musician well knows, the road to success is a long and arduous one with plenty of potholes and pitfalls along the way. Taking unpaid gigs, travelling long distances, and spending hours practicing for little reward are simply par for the course for those who want to make it big and land that coveted record deal. More often than not, busking is a part of that journey. Not only does it afford musicians a platform for playing their music to the public, but sometimes it also serves as a springboard into the music industry. There are even some musicians who pursue busking as a full-time career, touting good tips, great crowds, and the chance to do what they love as huge positives about their career choice.

Think back, though, to how many times you have walked past a busker without even noticing them. Sure, they may not be famous. But that doesn’t mean they won’t be. With the likes of MTV reintroducing Unplugged and acoustic music generally experiencing somewhat of a resurgence, that busker you just walked past could well be on their way to stardom. You don’t believe us? Check out these megastars who started out as buskers before they hit the big time.

It is no secret that George Michael worked hard to break into the music industry. He even admitted that he destroyed his own credibility by releasing bubble-gum songs as part of eighties duo Wham! But before they could get to the point of releasing an album, Michael and band member Andrew Ridgley used to busk in London tube stations, earning a few pounds a night, which they would then spend in trendy restaurants.

Before forming global sensation The John Butler Trio in 1998, John Charles-Wiltshire Butler was, in fact, a busker on the streets of his hometown Fremantle playing his own compositions. Performing an eclectic style of Indian, Celtic, bluegrass, and folk music, Butler released a self-recorded cassette Searching for Heritage in 1996 and landed his first paid gig in 1997 at the Seaview Hotel in Fremantle.

Formed in 2011, Duo has been playing their unique Flamenco-inspired covers of famous pop songs to audiences all over the world, which even include royalty. But before that, they were busy busking on the streets of Europe, from the Edinburgh Festival to the historic streets of Marseilles. These guys know a thing or two about earning their living. They also draw inspiration from a wide range of disciplines to excel at their craft and push their music careers forward.

Beck has been around for so long now that it’s hard to imagine a time before he was famous. But, believe it or not, that time did exist, and Beck busked his way through it. Just as the grunge music scene was taking off in mainstream America, Beck headed straight for Europe in search of his big break. Busking everywhere from London to Paris, he finally hit the big time when his single “Loser” shot straight to the top of the carts just a few years later.

British folk singer Passenger hasn’t always found the road to fame and fortune to be such an easy journey. Despite the fact that he is a Brit Award nominee and his single “Let Her Go” topped Billboard charts around the globe, he had to work super hard to get there, mainly by busking on the streets of the UK and Australia before hitting the big time.

Everyone knows Ed Sheeran. Even your Nana probably knows whom Ed Sheeran is. But did you know that he actually started his musical career busking on the streets? He delivered one such performance in St. Pancreas station to an audience who had no idea that this shy, humble redhead was about to hit the big time with his incredible songs.

So, don’t be so hasty to rush past that busker next time you see one. You might be missing out on front row seats to the hottest act in town!