‘You Can’t Do That On Television’ Is Being Rebooted 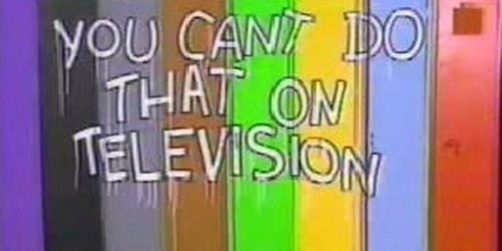 You Can’t Do That On Television was one of the first successes for the Nickelodeon network. In fact, it predates most of the classic Nick shows (Pete and Pete, Clarissa Explains It All, even Hey Dude), having aired on Nick from 1981 until 1990. The show aired in reruns on Nick until 1994, but since they it has largely disappeared…until now. It has been reported that You Can’t Do That On Television is being rebooted.

Roger Price, who created the show for Canadian television way back in the day, is attached to the revival. A lot has changed in television since the ’80s, including what you can and can’t do, but one assumes the spark of the original series will still be there. You Can’t Do That On Television was a sketch show starring kids, and each episode had a theme. Also, the show was responsible for popularizing the “sliming” of people, and the creation of Gak for Nickelodeon. Because back in the day if a person on the show said “I don’t know” they would have green slime dumped on them. We can only hope that remains the case.

That being said, they are saying that the reboot will incorporate “musical performances, celebrity cameos and interactive elements across multiple platforms,” which represents a change (perhaps a necessary one) for the show. There is no network yet for You Can’t Do That On Television. However, if somebody asks you what network it’s on, do not say “I don’t know.” You can’t risk a sliming.