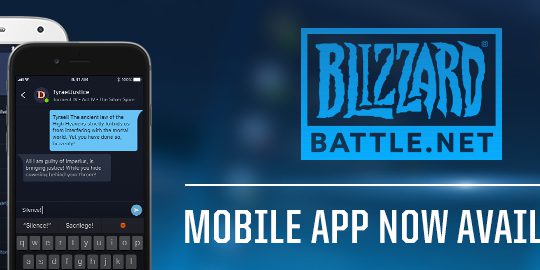 In case you’ve ever wanted to keep track of which Blizzard games your friends are playing online while you’re away from your desktop, Blizzard has you covered. The company behind Diablo, Warcraft, StarCraft, and Overwatch has just released the Blizzard Battle.net mobile app on iOS and Android.

The new app brings the social features found on the desktop version of Battle.net to your phone. Now you can check in on what your friends are playing or add new friends on the fly. You can even friend people in-person quickly using a QR code scanner. That’s probably a useful feature if you happen to be attending BlizzCon this coming November.

The Blizzard Battle.net mobile app includes a chat client so you can trash talk or coordinate play times. Your chat history stays available even when friends are off-line.

Your friends list will give you an instant update on what they’re up to at a glance – whether they’re online, playing a game, and which one. Stalking fellow Blizzard fans has never been easier!

Download the Blizzard Battle.net mobile app for iOS here or for Android here.