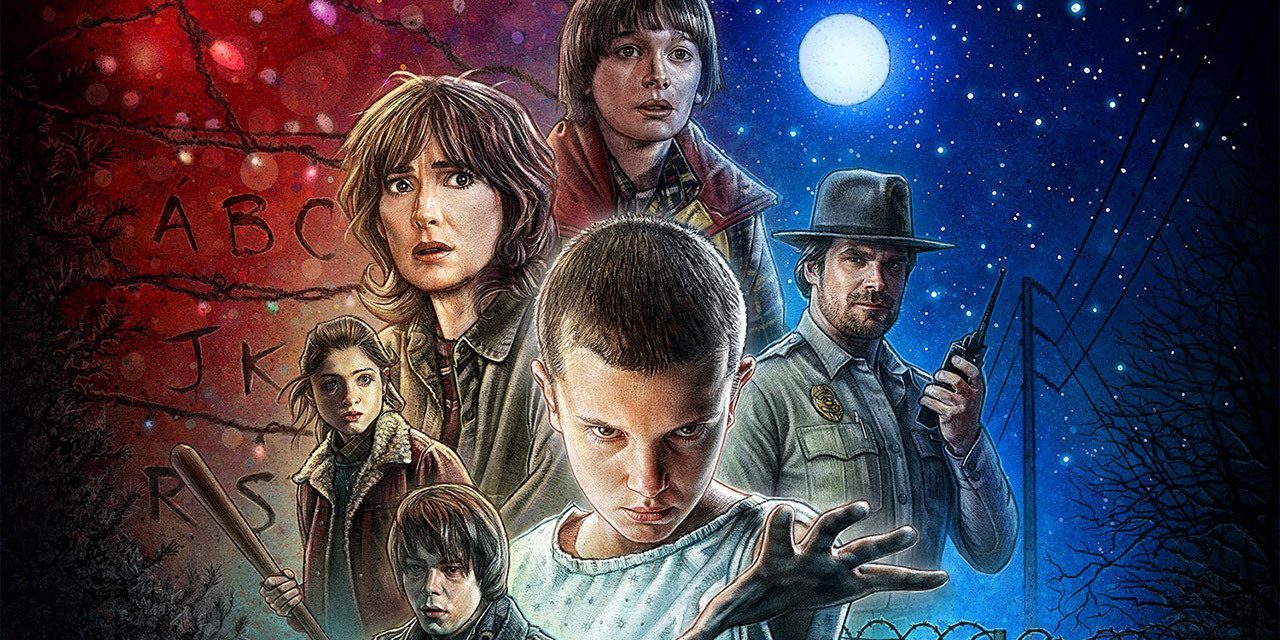 I tend to really enjoy pop culture that reflects other pop culture. If a TV show or a movie is well-versed in the culture that preceded it, it usually appeals to me. My favorite Batman is the Adam West version. I enjoyed the TV show Psych greatly, mostly because most episodes were a riff on some trope or genre. Meta stuff really speaks to me. I’ve consumed and absorbed so much pop culture that it has framed the way I engage with new stuff. As such, I should have been right in the target demographic for Stranger Things. Here was a show I had heard was deeply indebted to pop culture of the ’80s. We’re talking Steven Spielberg and John Carpenter and Steven King. While I’m one of those true ’90s kids you hear about, I’m certainly well-versed in ’80s pop culture. Knowing me, you’d assume I had watched the show the second it hit Netflix. I didn’t know. In fact, I only just finally got around to watching the first season of Stranger Things.

Yes, you read that right. Stranger Things dropped, and I did not even bother checking it out. I heard all the acclaim from critics and the general populace, but it didn’t sway me. Last Halloween, my friend dressed as Eleven, and everybody was talking about how much they liked the show, but I still didn’t watch it. Even when the Emmy nominations came out, and Stranger Things racked up a ton of them, I didn’t think, “OK, I’ve got to watch this now.” So why did I finally decide to bite the proverbial bullet and watch? Honestly, because there was nothing else for me to do. I’d already watched all the Netflix originals I was interested in. There were no old shows left for me to binge. It was the dog days of summer, so there was nothing on TV really. One weekend rolled around, and I had no other plans. I shrugged, and decided to finally, months after it first captured the zeitgeist, to watch Stranger Things.

If you are reading this, there is a good chance you are invested in the idea of Stranger Things, and are probably hoping I had a positive experience. Well, I have good news for you, because I really liked it. I know this is a shocking thing for somebody to say on the internet, but the first season of Stranger Things is quite enjoyable. In retrospect, I don’t know why I waited so long. It seemed like something I would be into, and it turns out that, yes, that’s exactly what it is.

To be fair, I had a couple of reasons why I was wishy washy on a show that had so many seemingly enticing elements. For starters, I’m not super into horror as a genre. I didn’t expect Stranger Things to be a bloody gorefest or some Eli Roth type thing, but I did know there was a monster and a kid that disappeared and another kid that was being experimented on by scientists or something and none of things make me exclaim “Sold!” It wasn’t enough to get me to completely write off the show, but it did make me drag my feet. However, the main reason I wasn’t sure I wanted to watch Stranger Things was because the show focused on kids, which meant that they were relying on child actors to anchor things. Are there good child actors? Sure, but having four or five kids around the age of 13 or so as the focal point did make me think that it could end up being a bit of a slog, from a dramatic perspective. I could understand people who loved sci-fi stuff overlooking that. Mark Hamill isn’t good in Star Wars, but nobody seems to care because he’s Luke Skywalker. I need good acting, though, or at least decent acting, and I felt like the odds of Stranger Things finding several kids who were up to the task unlikely.

Before I delve into my feelings on the show, here’s a brief overview of the story (which was wisely kept to a taut eight episodes), for those who need a refresher, and also those who are wholly unfamiliar. The story takes place in the quiet suburban town of Hawkins, Indiana during the 1980s, with the action really kicking off when Will Byers (Noah Schnapp) disappears when riding his bike home after a spirited game of Dungeons and Dragons. This sends his mom Joyce (Winona Ryder) into a spiral, and brings the local police chief Jim Hopper (David Harbour) into the picture. Meanwhile, a girl with supernatural powers only known as Eleven (Millie Bobbie Brown) escapes from a local scientific facility. She eventually joins up with Will’s friends Mike (the improbably named Finn Wolfhard), Dustin (Gaten Matarazzo), and Lucas (Caleb McLaughlin) as the trio takes on the quest of finding Will. Most people believe he’s dead. Joyce talks to him with Christmas lights. It turns out Will is stuck in a world colloquially called the “Upside Down,” where a monster lives (the monster is called the Demogorgon in another Dungeons and Dragons reference). Mike’s sister Nancy (Natalia Dyer) gets involved when her friend Barb (Shannon Purser) disappears. Nancy also dates a guy who looks like Jean-Ralphio from Parks and Recreation. Monsters are fought. Eggos are eaten. Vans are flipped with mind powers. In the end, Hopper and Joyce manage to save Will from the Upside Down, and Eleven seemingly sacrifices herself to save her friends from the Demogorgon. Joyce is happy to have her son back, but everything is not OK.  Because, you know, they had to set up a second season. A season I am really looking forward to when it drops in October.

That’s obviously a truncated version of the plot, but to go detail-by-detail would be an immense undertaking. Besides, I’m not here to tell you what happened in Stranger Things. I’m here to tell you about why I like what happened in Stranger Things. To begin with, since I established my concern about the focus on child actors as a drawback for me, I should say that all the main kids were good, and perhaps even really good. Of course, it’s Brown who got the Emmy nomination, and with good reason. While there are monsters and all kinds of crazy sci-fi stuff going on in the show, mostly I just cared about Eleven, and whether or not she was happy. When good stuff was happening and she was making friends and sitting in reclining chairs, I was happy. When stuff was going badly and when we saw her life back in the lab, it was emotionally wrenching in many ways. This is not a bold statement to make. She is, after all, a child that was essentially kidnapped and kept in a lab because she had telekinetic powers and she was experimented on and didn’t have any experience out in the real world. Who wouldn’t be invested in her, and who wouldn’t be delighted when she meets some kids and makes friends? Additionally, while Eleven is a badass who kills dudes with her mind, Brown is fragile whenever Eleven talks, which is rare. It’s a real tightrope to ask a child that young to walk, but Brown does it. While she disappears along with the Demogorgon in the season finale, I wasn’t too affected, because I knew she would be back for the second season. This is an instance of when waiting to watch a show can be a negative. Then again, I didn’t expect Stranger Things to kill a tween anyway, which also took away some of the mystery surrounding Will.

Harbour and Ryder anchor the adult cast of the show, and they are both great. Harbour is also Emmy nominated, and rightfully so, because he gives the best performance on the show. He doesn’t have a super showy role, but the guy is just a great gruff actor, but he played a litany of emotions with aplomb. Ryder does what Ryder does. She always seems so immensely brittle, even when I see her on talk shows, but that works in a role like this. Her casting is sort of a retro throwback as well, but she’s not here just because Gen Xers love her. It really is a nigh impeccable cast.

The story is well paced over eight episodes, and while it did feel like maybe it took a little longer than it should have to pick up the action, once they make that leap the show gets quite intense. The monster was fine, and so was the idea of the Upside Down. I didn’t think all that stuff was great, but it definitely added a real intense element, especially when we started actually seeing the monster. Plus, the stuff with the lights was actually pretty clever. If I was going to throw the “sci-fi elements” into a big pile and assess them, I’d say they were generally good. Not everything worked for me on the show, though. Why was I supposed to care about Nancy and Steve and Nancy maybe hanging out with bad influences? Also Tommy and Carol were so immensely annoying. I know they were supposed to be d-bags, but they were in a way that actively irritated me in actuality. Also, when Nancy and Will’s brother Jonathan (Charlie Heaton) start hanging out and they tease romance between them, I rolled my eyes a bit. The last thing I need is another story about the troubled outsider guy who wins the heart of the cool girl who realizes that popularity isn’t everything. Fortunately, they don’t end up together at the end of the first season.

Since I don’t want to end things on a negative note, I will say that the show looks great, and the music is awesome. I had heard about the music for the show before I had watched it, and I thought it had to be overblown, but damn if the music isn’t catchy.

They say there is “too much TV” now, or that we are at “Peak TV,” and it is easy for stuff to fall through the cracks, or get put on the backburner. That can even happen with an immensely popular show like Stranger Things. I didn’t know if it would be for me. I was wary enough to wait until I was out of options before I gave it a chance. When I did, though, I was quite pleased with my decision. Stranger Things is worthy of the hype. It’s a sci-fi show with a lot of thought given to its action and its world building, but it also has a tremendous ensemble at its disposal, led by a young girl who isn’t even old enough to drive. Bring on season two!